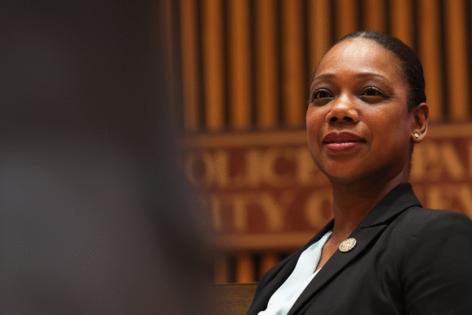 The Justice Department on Thursday said it will investigate the NYPD’s scandal-plagued Special Victims Division due to rampant allegations that detectives are “retraumatizing” sex assault victims.

Federal prosecutors will examine the Special Victims Division’s policies and training in the probe of alleged “gender-biased policing.” The feds are also eyeing how investigators treat and communicate with victims of rape and sexual assault.

The Justice Department launched the probe due to evidence of a longstanding failure by the NYPD to conduct basic investigative steps, “instead shaming and abusing survivors and retraumatizing them during investigations,” according to a release.

Alarming allegations about the division had emerged “over the last several months,” said Brooklyn U.S. Attorney Breon Peace, who credited the NYPD for already implementing some reforms.

Prosecutors from Brooklyn, Manhattan and Justice Department headquarters in Washington will handle the high-stakes probe. Mayor Adams and NYPD Commissioner Keechant Sewell pledged to cooperate with the investigation.

“We welcome this review, will cooperate fully in this investigation, and will continue to take all steps necessary to ensure we fix problems that have been decades in the making,” said mayoral spokesman Max Young.

Sewell said the Police Department’s efforts to overhaul Special Victims are well underway following input from victim-advocates. The federal probe was revealed only one month after the commissioner appointed a new commanding officer for Special Victims, Inspector Carlos Ortiz.

“Our goal is for SVD to be the national model,” Sewell said. “I believe any constructive review of our practices in the Special Victims Division will show that the NYPD has been evolving and improving in this area, but we will be transparent and open to criticism as well as ideas in the process.”

A scathing 2018 Department of Investigation report found the unit was understaffed and lacking experienced detectives. Uncaring cops were found to regularly close cases without full investigations. The audit further concluded detectives were dismissive of date rape allegations and discouraged victims who knew their assailants — which make up the majority of cases. Eight out of 10 rapes are committed by perpetrators who knew their victim, according to Justice Department data.

Flawed Special Victims’ investigations have persisted for more than a decade and deprived “survivors and the public of the prompt, thorough, and effective investigations needed to protect public safety,” the feds wrote in a release.

Leslie McFadden said the cops’ handling of her report about being drugged and raped by a co-worker six years ago compounded her trauma.

“The very first question (the detective) asked me at the start of the interview was whether this was really a case of sexual assault — or just a case of regret,” McFadden testified.

Another woman, identified as Christine, said after she was raped by a man she met on a night out, the cops declined to track down CCTV footage from inside the bar, test her hair for drugs, or even look at a blueprint she drew up of the suspect’s apartment.

“To see the values of ‘courtesy,’ professionalism’ and ‘respect’ on every NYPD police car,” she said, “is an insult to my experience.”

The Justice Department announcement comes amid a nationwide shift in how law enforcement approaches victims of sex-based crimes. In May, Manhattan District Attorney Alvin Bragg moved to clear the criminal records of sex-trafficking victims who were forced to commit crimes out of desperation and necessity, recognizing that saddling them with records only made them more vulnerable and likely to be revictimized. Bragg has also pursued reforms of how sex-crime cases are prosecuted following years of criticism that the DA’s office let wealthy, politically connected predators off easy.