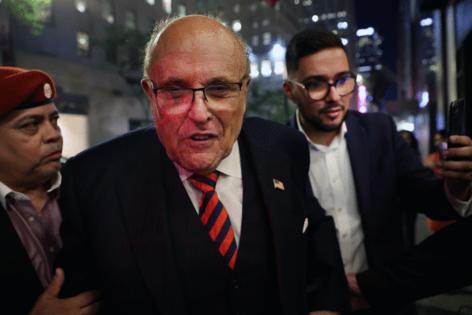 NEW YORK — Mayor Eric Adams stepped up his assertion that former Mayor Rudy Giuliani falsely reported a crime, likening Giuliani’s recent assault allegations to the notorious “Central Park Karen” saga in which a white woman accused a black man of threatening her and was later charged with filing a false police report.

“Just as we’ve done in other cases (like) where the Karen incident happened in Central Park and other incidents, I believe the DA should look at that when determining what the final outcomes is,” Adams said Wednesday.

A day earlier, Adams suggested that Giuliani falsely reported a crime when he accused Staten Island supermarket worker Daniel Gill of hitting him with the intent of knocking him down. Video of the incident depicts Gill patting the former mayor on the back at the ShopRite he worked at while Giuliani was there campaigning for his son, Andrew, who ultimately lost in his bid to run for governor in November’s general election.

Giuliani has claimed that Gill “hit me to knock me down” and said it felt like a bullet or as “if a boulder hit me.” He also called Adams “an idiot” Tuesday because “I didn’t file a report.”

“Can you imagine that?” Giuliani said. “He wants to prosecute me for a false police report that I didn’t file. His Police Department filed the report. They did the investigation.”

On Wednesday, Adams said Giuliani did, in fact, speak to the NYPD about the incident, a detail which NYPD sources corroborated.

The term “Karen” is slang for an entitled white woman.

Adams tried to make the case Wednesday that what Giuliani did fell into a similar category.

“The former mayor made several serious allegations. He was videoed saying things that happened. Those things did not happen,” Adams said at an unrelated press conference in lower Manhattan. “Because of his report to the Police Department, a person went to jail for 24 hours.”