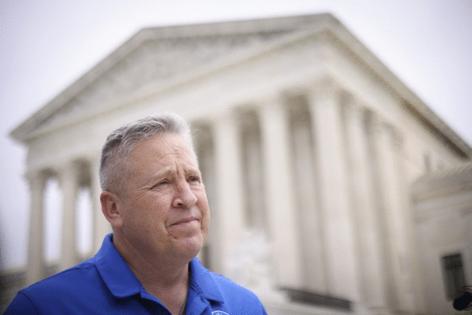 The U.S. Supreme Court’s decision to permit a high school football coach to pray on the field after games is expected to reopen a vigorous and probably tense debate among parents, educators and others over how far religion can enter public school grounds, California education and legal experts said Monday.

Conservatives and some Christian leaders praised the court’s action, saying it allowed for the personal religious expression of the coach and those who voluntarily followed him, a reasonable accommodation to religious and free speech rights. But civil libertarians and many educators said allowing a coach or any other school authority figure to lead a prayer amounted to the kind of establishment of religion that the Constitution forbids.

“The court has opened the door to prayer in schools more than at any time in the last 60 years,” said Erwin Chemerinsky, a constitutional law expert and dean of the law school at U.C. Berkeley. “There will be much litigation. And it is not at all clear where the court will draw the line.”

A 60-year-old decision by the high court to bar an official prayer in New York schools had created a bright line for school officials: that practices and policies on campus should have strictly secular purposes. Monday’s ruling has blurred that line and will invite additional challenges by those who want more room for religious expression in schools, said John Rogers, a professor of education at UCLA and an expert in training school administrators.

“One of the results of this decision is that it probably is going to open up more conflict in schools,” Rogers said. “It’s probably going to create more challenges for principals and other district leaders, as new efforts are made to bring religion into the space of public schools. In some school settings, religious minorities or people who are not affiliated with any religion are going to feel some sense of compulsion or some sense of silencing or alienation.”

Monday’s decision came in the case of Joe Kennedy, an assistant coach at Bremerton High School in Washington state. Kennedy began kneeling by himself on the 50-yard line after games to pray, though the sessions soon became highly publicized and drew crowds of players and spectators to the field.

When the prayers became a public event, school officials warned the coach that they could be seen as violating the Constitution’s ban on an “establishment of religion.” Kennedy was suspended when he refused to follow the district’s guidance. He was not rehired for the next year.

Lower courts ruled against Kennedy, but the conservative majority on the Supreme Court found that the coach’s prayers were protected under two other provisions of the 1st Amendment — the free speech clause and the “free exercise” of religion clause.

“The Constitution and the best of our traditions counsel mutual respect and tolerance, not censorship and suppression, for religious and nonreligious views alike,” Justice Neil M. Gorsuch wrote for the 6-3 majority.

The court’s action spurred a lively discussion Monday on a Facebook group for parents who support teachers in the Los Angeles Unified School District and are generally aligned with their union.