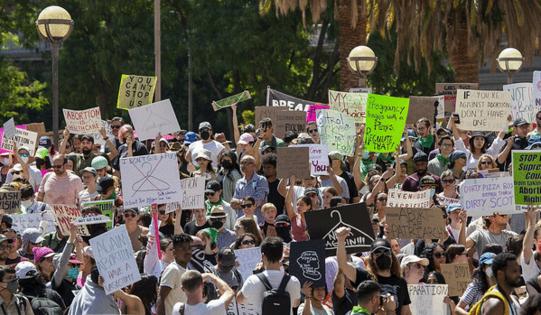 SACRAMENTO, Calif. — California voters will decide in November whether the state Constitution should explicitly protect a person’s right to an abortion and birth control.

On Monday, the Democratic-controlled Legislature gave final approval to a measure that would put the issue before the state’s voters, in the latest countermeasure aimed at the U.S. Supreme Court’s decision to overturn Roe vs. Wade.

Senate Constitutional Amendment 10 by Senate President Pro Tem Toni Atkins, D-San Diego, would, if approved by voters, further codify the state’s already progressive reproductive rights, which grant anyone of reproductive age “the fundamental right to choose to bear a child or to choose and to obtain an abortion.” Currently, those rights in California are held up by case law and statutory laws, but Atkins said hostile attacks on abortion access convinced her those aren’t enough.

“We know from history that abortion bans don’t end abortion,” said Assembly Speaker Anthony Rendon, D-Lakewood, a co-author of SCA 10. “They only outlaw safe abortions. We must preserve the fundamental reproductive rights of women here in California, because they are under attack elsewhere.”

With the measure now headed to the November ballot, the debate over abortion rights could boost voter turnout and force candidates in contested statewide and legislative races to reckon with an issue that has deeply divided the country.

Among likely voters in the state, 76% said they did not want Roe vs. Wade overturned, according to a poll earlier this year by the nonpartisan Public Policy Institute of California.

Democratic lawmakers introduced more than a dozen bills in California in anticipation of the landmark case being upended, including two already signed into law by Gov. Gavin Newsom this year. The governor signed a bill Friday that immediately protects abortion providers in California from civil liability judgments based on claims made in antiabortion states. Health insurers licensed by the state will be required to cover the full cost of an abortion, without a copay, deductible or other cost-sharing, under a bill Newsom signed in March.

Newsom and legislative leaders reached a budget agreement Sunday that includes millions of dollars to be set aside for abortion services for the uninsured, workforce programs to increase the number of providers and financial assistance to patients traveling from other states.

Newsom said California will be a “sanctuary” for abortion care, regardless of where a person lives.

California officials have been preparing for an influx of patients from areas of the country where bans will be resurrected for the first time since federal abortion rights were established in 1973.