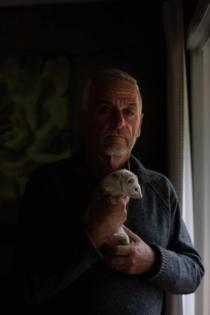 LA MESA, Calif. — Noodle was the first to tumble out of the cage, roused by a series of belly rubs and head scratches.

She scampered around the lower-level den, bouncing around a pair of La-Z-Boy recliners, a white-and-gray flash with her long back hunched.

Then two more ferrets emerged from the cage. Merlin, living up to his masked “bandit” markings, chased Astro, who shimmied through a crinkly plastic tunnel in a frantic effort to get away. Watching him interact with the humans in his life, Astro gave every indication that he would rather cuddle with them than tussle with his cage-mate.

“They’re so much fun and bring me so much joy,” said Pat Wright, who keeps the three ferrets in his San Diego-area home, along with a corgi and an English shepherd. “How anyone can see these pets as a threat is absurd.”

But the state does see ferrets as a threat; it’s illegal to keep them as pets in California, a fact that has defined much of Wright’s adult life.

In nearly three decades of ferret activism, Wright has gone to jail, run for political office, lobbied legislators, collected thousands of signatures and battled decades of rejection and apathy. One of his ferrets, Rocky, had to be euthanized after he bit a TV cameraman at a legalization rally.

Wright came closest to his goal in 2004, when the state Legislature passed a bill legalizing ferrets in California. But then-Gov. Arnold Schwarzenegger vetoed it.

Through it all, Wright, a freelance marketer, has owned a succession of pet ferrets. He carries a faded photo in his wallet of his first, Chester, who died in 1994. Over the years, he has owned two dozen, among them Gonzo, Pooka, Daisy, Raleigh, Simba and Jasper. He’s spent tens of thousands of dollars on critical surgeries, and he’s mourned their deaths for months after spreading their ashes in his ample backyard.

But Wright’s quest may soon be coming to an end. He is 63 and thinking of moving to Mexico, where ferrets are legal.

Ferrets require a 100% meat diet — the ultimate keto — and have a musky odor that, owners say, ranges from corn chips to grape juice to old books. When they’re pleased or excited, they emit a noise called a dook — a rapid-fire chortling.