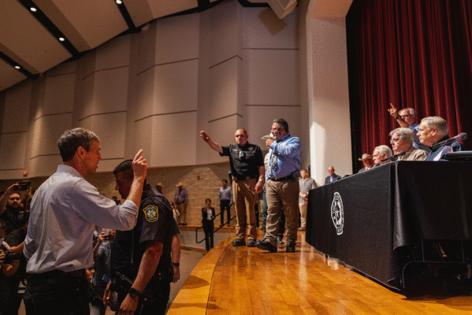 UVALDE, Texas — Texas Gov. Greg Abbott was confronted by political rival and former U.S. Rep. Robert “Beto” O’Rourke at a Wednesday news briefing, where officials gave details about the mass shooting at a local elementary school in Uvalde. Three adults — including the gunman — and 19 students were killed.

O’Rourke, 49, a former congressman from El Paso, is running a long shot campaign against Abbott, 64, who is seeking a third term as governor after serving as Texas attorney general.

Abbott took the stage at the auditorium in Uvalde High School, surrounded by state and local Republican officials, including Sens. John Cornyn and Ted Cruz. He described how the 18-year-old shooter armed himself with an AR-15-style rifle, but said the problem wasn’t gun control.

“I asked the sheriff and others an open-ended question and got the same answer from the sheriff as well as from the mayor of Uvalde. The question was, what is the problem here? And they were straightforward and emphatic. They said, ‘We have a problem with mental health illness in this community,’” Abbott said, including, “the need for more mental health support in this region.”

Soon after, O’Rourke — seated in the audience — stood up and approached the stage, calling the shooting “totally predictable when you choose not to do anything.”

Cruz — who bested O’Rourke in his last Senate race — told him to sit down.

O’Rourke pointed his finger at Abbott.