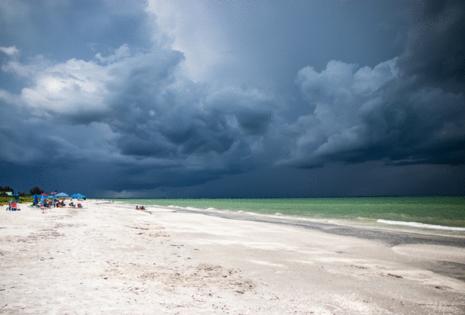 NHC is monitoring an area of low pressure over the north-central Gulf of Mexico about 150 miles south of Pensacola that has a 10% chance of development within the next 48 hours, according to an 8 p.m. report.

“This system is producing disorganized thunderstorms and gusty winds across portions of the Florida Panhandle, southern Alabama and over the central and northern Gulf of Mexico,” NHC forecaster John Cangialosi said. “Surface pressures remain high, and strong upper-level winds should prevent significant development before this system moves inland over the central Gulf Coast” on Monday.

Heavy rainfall is expected to sweep along the Gulf Coast and spread across the southeastern United States over the next two days, Cangialosi said.

Hurricane season officially starts on June 1. The 2022 hurricane season is expected to be a busy one, according to the meteorological team at Colorado State University. Its forecast released in April called for an above-average year with 19 named storms this season — five more than what the National Oceanic and Atmospheric Administration considers average, based on data collected from 1991 to 2020.