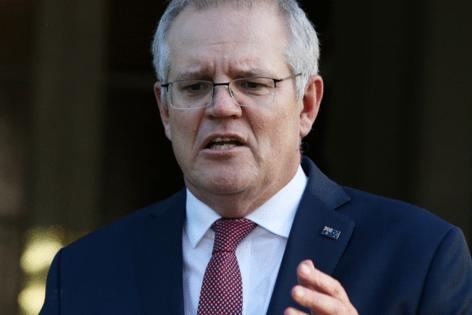 “I can’t stop myself from saying that the defeat of Morrison suits me very well,” Le Drian said in Paris during a ceremony in which he handed over to his successor, Catherine Colonna.

Morrison’s actions showed “brutality and cynicism, and I would be even tempted to say a form of notorious incompetence,” Le Drian said. The U-turn, because of a new defense pact, caused a rift between countries.

Le Drian said he hopes that in the future France will be able to put in place, once again, “a frank and constructive dialogue” with Australia.

Morrison, U.S. President Joe Biden and U.K. Prime Minister Boris Johnson last year unveiled a new security partnership that scuppered Australia’s 2016 deal with French shipbuilder Naval Group to build up to 12 submarines — a project that had swelled to an estimated A$90 billion ($64 billion).

Le Drian said in September he felt “stabbed in the back” over the “unacceptable” deal that would hurt French business and shut the country’s military out of a key initiative in Western efforts to build a bulwark against China.

Morrison conceded defeat on Saturday night after Australian voters chose Anthony Albanese’s Labor Party, which is set to take power in the country for the first time since 2013. The shift away from Morrison’s conservative government is likely to bring greater action in Australia on climate change, women’s issues and anti-corruption efforts.