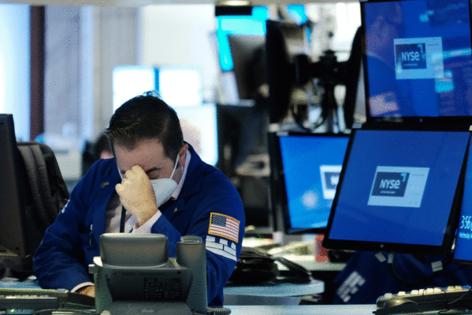 A dramatic late-session rally brought the S&P 500 back from the brink of a bear market, but the index still sank for a seventh straight week in a stretch of weakness not seen since 2001.

The benchmark closed the day little changed in the green, after a selloff earlier sent it down more than 2% from a January closing high, meeting the common definition of a bear market. At the end of another volatile week, the monthly expiration of options tied to equities and exchange-traded funds exacerbated price swings. Treasuries gained with the dollar as havens caught bids.

In a week marked by buy-the-dip, sell-the-rally price action, investors grappled with concerns about an economic slowdown and prospects for more monetary tightening, while retailers signaled the mounting impact of high inflation on margins and consumer spending.

The S&P 500’s seventh weekly decline marked the longest losing streak since the dotcom bubble burst more than two decades ago. It’s just its fourth streak of seven or more weekly losses in the post-World War II period, according to Bespoke Investment Group.

“It’s a small sample size, but these types of streaks haven’t occurred during particularly positive periods for the equity market,” wrote the firm’s strategists in a note. “The root causes of the weakness have been the hawkish FOMC and increasing concerns over the potential for a recession.”

—“The economy is relatively fragile right now, has been weakening, and obviously inflation is causing a lot of consternation among a lot of companies and investors, and we weren’t seeing that being reflected in earnings estimates,” Mike Mullaney, director of global markets research at Boston Partners, said by phone. “We just haven’t seen negative revisions yet, and until you see negative revisions, we still think there’s more downside to the market.”

—“A lot of the excesses have been wrung out, especially out of the more speculative segments of the market,” Keith Lerner, co-chief investment officer and chief market strategist at Truist Advisory Services, said in a note. “In times like this, volatility and pullbacks are always uncomfortable and come with bad news, but they are also the admission price to being in the market with the potential for higher long-term returns relative to most other asset classes.”

—“No sign yet of the Fed being unhappy about tighter financial conditions so far, and markets are continuing to fully price in two further 50bp moves from the Fed in June and July,” wrote Deutsche Bank’s Jim Reid. “Nobody said getting inflation back to target from such lofty levels would be easy. So if you’re looking for a Fed put, it may take a while.”

In the latest developments over Russia’s war in Ukraine, the Senate passed a more than $40 billion Ukraine aid package, sending the bill to President Joe Biden for his signature. Meanwhile, finance chiefs from the Group of Seven leading economies pledged to deliver $19.8 billion of budget aid to Ukraine this year as the country struggles to continue functioning amid destruction wrought by Russia’s invasion.

What damage will be done to the US economy and global markets before the Fed changes tack and eases policy again? The “Fed Put” is the theme of this week’s MLIV Pulse survey. Click here to participate anonymously.

Some of the main moves in markets:

—The Japanese yen was little changed at 127.87 per dollar

—The yield on 10-year Treasuries declined five basis points to 2.78%