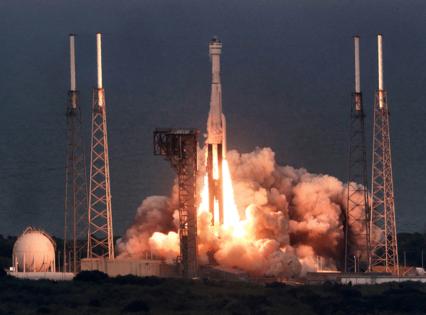 With a successful liftoff and after nearly 2 1/2 years, NASA and Boeing want to hit the target this time with their new and improved CST-100 Starliner on a redo of its uncrewed test flight to the International Space Station.

The new capsule blasted off atop an Atlas V rocket from Cape Canaveral Space Force Station in Florida on Thursday at 6:54 p.m. Eastern time on what’s dubbed Orbital Flight Test-2. Florida’s notorious afternoon showers steered away from the Space Coast with a flawless countdown.

While the launch worked as planned, it wasn’t until 40 minutes after that Boeing announced a successful orbital insertion, something it wasn’t able to accomplish the last time Starliner headed to space.

That trip in December 2019 had communication and software issues that caused a major misstep in Boeing’s plans to join SpaceX as one of two partners in NASA’s Commercial Crew Program to ferry astronauts to and from the space station. The capsule launched and landed safely, but it never made it to the ISS.

SpaceX has since surged ahead flying humans to the station for the first time in its Crew Dragon in May 2020 and is in the midst of its fourth operational flight there.

“We always wanted to have more than one provider,” said NASA Kennedy Space Center Director Janet Petro ahead of the launch. “So having a second provider that we can purchase a commercial service from to transport our astronauts to and from the International Space Station gives us a reliability, a redundancy that we really need and we really want within our Commercial Crew Program.”

Starliner had been on pace with SpaceX before the 2019 setback, an incident NASA referred to as a “high visibility close call” that led to a postlaunch review calling for 80 changes to the program. After nearly 18 months of fixes, Boeing was back last August for a retry. But that attempt was foiled when moisture caused corrosion on several valves, and Starliner was delayed another nine months.

Now, with new hardware in place and issues resolved, the spacecraft can finally finish the job, which is being done at no cost to NASA since it’s a reflight. If all goes as planned, the Starliner will dock with the ISS on Friday at 7:10 p.m. Eastern time and could return to Earth as early as May 25.