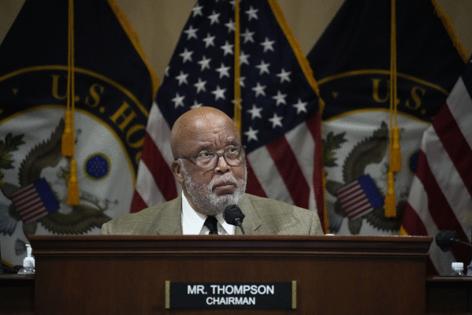 WASHINGTON — The Justice Department has requested access to transcripts of interviews conducted by the House committee investigating the Jan. 6 insurrection at the U.S. Capitol.

The committee and department officials haven’t yet reached an agreement that could help advance a long simmering federal investigation into efforts to prevent the certification of Joe Biden’s victory in the 2020 president election, according to Representative Bennie Thompson, the Mississippi Democrat who chairs the panel.

The committee is investigating the deadly attack on the Capitol, where lawmakers were counting Electoral College votes, and the events leading up to it.

Thompson said that once the committee finishes its work, “If they want to come and talk, just like we’ve had other agencies to come and talk, we’d be happy to talk to them, but we can’t give them access to our work product at this point.”

Thompson has said the committee intends to wrap up its depositions and witness interviews before holding as many as eight public hearings next month, starting June 9. A final committee report of its findings is planned for early fall, he has said.

“My understanding is they didn’t tell us specifically what transcripts or anything like that,” Thompson said. “And obviously, we spent quite a bit of time and effort to get where we are. And we are still in the midst of our own investigation.”

The request for transcripts was reported earlier by the New York Times.

Thompson said he didn’t know the Justice Department’s focus. Over 10 months the committee has interviewed over 1,000 people in private and collected more than 100,000 documents. It has issued 99 subpoenas for testimony and material.