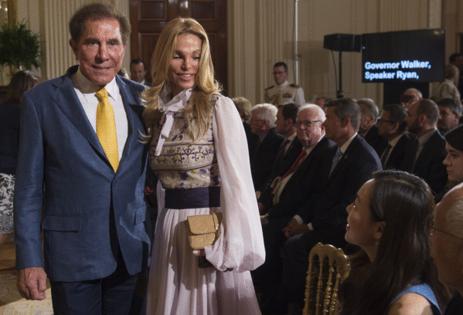 Former Wynn Resorts Chief Executive Steve Wynn lobbied then-President Donald Trump in 2017 on behalf of the Chinese government, which sought the return of an exiled businessman, the United States said in a lawsuit seeking to compel Wynn to register as an agent for China.

Wynn engaged in those efforts at the request of Sun Lijun, a former Vice Minister of China’s ministry of public security, and did so to protect operations of casinos in Macau owned by Wynn’s company, the Justice Department said in the complaint filed in federal court in Washington, D.C.

Elliot Broidy, a former Trump fundraiser who had pleaded guilty to illegal lobbying, sought Wynn’s help on behalf of Sun, according to the lawsuit. Broidy had been cooperating with prosecutors in their investigation of fugitive businessman Jho Low’s push on behalf of China for the U.S. to extradite Guo Wengui, a wealthy exile who criticized China’s government.

According to the U.S. lawsuit, during a June 27, 2017, dinner with the former president, Wynn told Trump about the Chinese government’s desire to have the businessman removed from the U.S., and gave the man’s passport photos to Trump’s secretary.

“After the dinner, Broidy informed the Defendant by text (through Defendant’s wife) that Sun was “extremely pleased and said that President Xi Jinping appreciates (the Defendant’s) assistance.”

Colby Williams, a former lawyer for Wynn, didn’t immediately respond to a request for comment.

After Wynn had discussions and met with Trump in the White House about the PRC national’s status, in late August 2017, Broidy hosted Wynn and his wife on a personal yacht off the Italian coast, the agency said in the suit. At that time, Broidy and Wynn phoned Trump from the yacht and asked “PRC national’s status, and then-President Trump responded that he would look into the matter,” the government said.

Broidy, a Los Angeles money manager, admitted that he conspired to violate the Foreign Agents Registration Act. The law, which is rarely invoked in criminal cases, requires individuals to register with the U.S. attorney general before lobbying on behalf of foreign nationals. He faces as long as five years in prison.

The suit is “the first affirmative civil lawsuit under FARA in more than three decades,” Assistant Attorney General Matthew G. Olsen of the Justice Department’s National Security Division, said in the agency’s statement, referring to the Foreign Agents Registration Act.