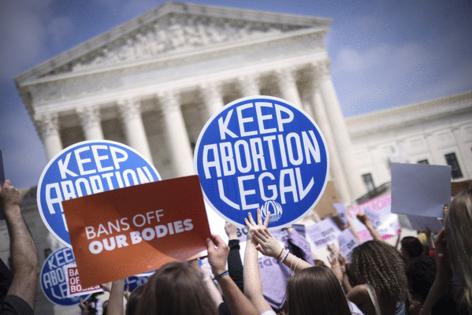 If, as expected, the U.S. Supreme Court decides as early as next month to overturn Roe v. Wade, just how quickly Republican-dominated legislatures will act to restrict abortion and how far they will go to eliminate the procedure is uncertain.

But recent rhetoric from state officials and events in state capitols offer some clues.

All the states on the list already have court-blocked abortion bans on the books that could be made effective if the high court overturns Roe. But some officials said they wanted to go further.

In South Carolina, for example, Republican Gov. Henry McMaster said he was willing to call the legislature back into session and would support anti-abortion legislation that makes no exceptions for rape or incest. In February, the state enacted a ban on the procedure after six weeks of pregnancy, with exceptions for rape, incest, fetal anomalies and threats to the health of the patient. The bill was put on hold by a federal court.

At the same time, the Republican sponsor of a Louisiana abortion ban that would outlaw all abortions from the moment of fertilization and hold both the provider and the patient liable for felony homicide drew criticism even from other anti-abortion officials.

Staunchly anti-abortion Gov. John Bel Edwards, a Democrat, said he would veto the measure if it passed, writing in a statement, “To suggest that a woman would be jailed for an abortion is simply absurd.”

Anti-abortion organizations Louisiana Right to Life and Louisiana Family Forum also opposed the bill, along with some fellow Republicans in the legislature. The bill has since been amended to remove the criminalization provision, and it is considered unlikely to pass this legislative session.

Emboldened by the high court’s conservative majority, some states were tightening restrictions even before the preliminary ruling leaked. For example, a new Oklahoma law banning abortion at six weeks of pregnancy — before most women even know they’re pregnant — took effect one day after the draft opinion became public.

In the two weeks since, clinics in Oklahoma — where neighboring Texans had been seeking abortions ever since their state effectively prohibited the procedure last year — were forced to abruptly stop performing most abortions, though they remain open to provide other reproductive health needs.