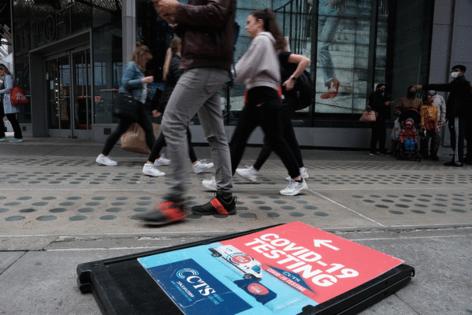 NEW YORK — Mayor Eric Adams upgraded New York City’s COVID-19 alert status to high on Tuesday due to a surge in people testing positive and being hospitalized for the virus.

The change in status from a medium risk alert to high risk comes as coronavirus hospital admissions have increased steadily over the past two months and as more and more New Yorkers are becoming ill.

“Now is the time to double down on protecting ourselves and each other by making choices that can keep our friends, neighbors, relatives and co-workers from getting sick,” the city’s Health Commissioner Dr. Ashwin Vasan said in a written statement Tuesday.

“As a city, we have the tools to blunt the impact of this wave, including distributing tests, masks and promoting treatments. Getting back to Low Risk depends on everyone doing their part, and if we follow guidance, our forecasts anticipate this wave’s peak will not last long. What we do now can make all the difference.”

Health officials have recommended New Yorkers mask up when indoors, but the status upgrade does not come with any new mandates.

The upgrade was triggered by two things, according to Health Department spokesman Patrick Gallahue.

The other trigger is the recent upswing in the number of people testing positive for the virus. As of Tuesday, that number stood at 308.51 cases per 100,000 people over the last seven days. The total number of new cases citywide is 3,472, according to the latest city data. That’s nearly 3,000 cases more than what the city recorded in early March, when the number was 689.

Hospital occupancy for people with COVID-19 is rising too, but is not at a level that the city considers high risk yet, Gallahue said. The percentage of sick people who are staying in city hospitals is now at 4.24%, data posted on the city’s website shows. Gallahue said 10% is the number at which the hospital occupancy rate would be considered high risk.

She worries that the uptick in people with the virus coming into hospitals could spell harder times ahead.

“Unless it starts to settle down, we’re going to be heading for another surge,” she said.

Staffing levels at the hospital are relatively low as well, she added. And that could mean even more trouble for patients.

“We’re not anywhere near a full compliment. All of the vacancies have not been filled,” she said, “COVID isn’t helping resolve any of these issues.”

Tuesday’s status upgrade also comes a day after Adams announced that the city would be distributing an additional 16 million at-home test kits over the next month and after Vasan put out an advisory strongly recommending New Yorkers mask up when in public settings indoors. The advisory, though, does not require New Yorkers to mask up indoors. Neither does the city’s upgraded alert status.

A day before, on Monday morning, city officials hinted that an upgraded COVID-19 status alert may be on the horizon, but Adams later in the day said it was unlikely he’d impose any new mandates.

“If there comes a time that our hospitals are now in a state of emergency, or we’re trending that way and my doctors who run the hospitals tell me, ‘Eric, this is what we need to do,’ I’m going to listen to them,’” Adams said.

“Right now, they’re telling me, ‘No, we don’t need to do that.’ We have this under control. We don’t have this crisis in our hospitals that we had previously. We don’t have that anymore. So I’m listening to the team as I win this battle of COVID for all of us.”

Hospitalizations in New York City have increased since mid-March when the number of daily hospitalizations averaged out at 24 over seven days. As of Tuesday, that number was at 58.

But the city’s website also states that hospitalizations have been “decreasing” over a shorter, more recent time frame. The most recent seven-day average of daily hospital admissions is now 58 people per day, lower than the 65 people per day since mid-April.

Dr. Jay Varma, who worked as a top health adviser under former Mayor Bill de Blasio, said Adams and his administration put themselves in a tough spot when they announced in March that they’d be using a color-coded system with low-, medium-, high- and very high-risk levels to chart the city’s overall COVID status.

The chart locked Adams into taking action when certain thresholds are met, but it doesn’t necessarily account for unforeseen factors such as new variants or what demographics are being impacted most by current spread of the virus, he said.

The system in place does not provide for mandating certain behavior either — like wearing masks indoors or providing proof of vaccinations at restaurants — and that’s likely because such requirements have become politically unpalatable as the city continues its attempt to fully reopen.

“They boxed themselves in,” Varma said. “So we just say the same thing a little differently: ‘Pretty please wear a mask.’ ”