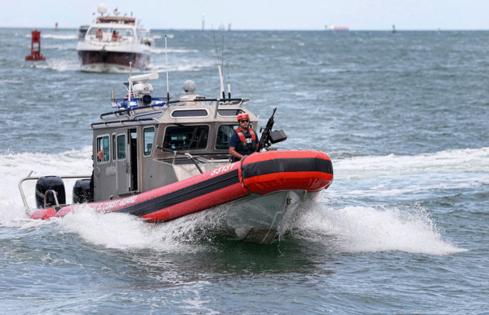 The U.S. Coast Guard intercepted 55 people from Cuba at sea off the Florida Keys over a five-day period last week.

A Coast Guard cutter Charles Sexton returned them to Cuba on Tuesday, the agency said.

They were stopped at sea in six separate interdictions off the Keys from last Monday, May 9, through Friday, according to the Coast Guard.

South Florida is experiencing a wave of maritime migration from Cuba and Haiti, with more people fleeing deteriorating economic, safety and political conditions.

Coast Guard crews on Monday took 19 people from Cuba to the Bahamas who the agency said it rescued last week off the Bahamian island of Anguilla Cay.

“The Coast Guard and our partners continue to patrol the waters around The Bahamas, Haiti, Dominican Republic, Cuba, Puerto Rico to help prevent loss of life,” Petty Officer 3rd Class Ryan Estrada, a Coast Guard spokesman, said in a statement. “Taking to the seas on rustic makeshift vessels without safety gear or lifesaving equipment is dangerous.”

The Coast Guard says the numbers of Haitians taking to the sea is at levels not seen in decades — about 4,500 people have been stopped before reaching U.S. and Bahamian shores since Oct. 1.

Cuban migration to South Florida since October is the highest its been since 2016.

In the six months since the beginning of the fiscal year — which runs from Oct. 1 to the end of September — the Coast Guard said it has stopped 1,879 people from Cuba crossing the Florida Straits. That’s compared to 838 people in fiscal year 2021 and just 49 the prior fiscal year, according to the Coast Guard.