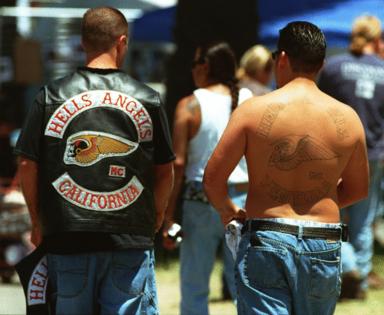 VALLEJO, Calif. — The FBI is investigating potential “criminal enterprise activities” of the Vallejo chapter of the Hells Angels Motorcycle Club, including an hours-long beating at the infamous outlaw biker gang’s clubhouse and the possession of guns, silencers, and more than 1,000 rounds of ammo seized in a series of December raids, court records show.

In a criminal complaint filed in the Eastern District of California, federal authorities revealed they’ve sought arrest warrants for three Hells Angels members and one “enforcer,” as part of an ongoing investigation into the Vallejo charter of the Hells Angels.

The FBI appears to be weighing the possibility of seeking an indictment under the RICO Act, as Task Force Officer Shane Raftery described the charter as a “criminal enterprise” that lords over other motorcycle clubs and is involved in a territory dispute with rival Mongols and Vagos clubs in Yolo County.

“To perpetuate the enterprise and to maintain and extend its power, Vallejo Hells Angels Motorcycle Club members and associates engage in a pattern of racketeering predicates, including committing and conspiring to commit murder, attempted murder, intimidation, and assault resulting in great bodily injury against individuals who pose a threat to the enterprise or who jeopardize its operations,” Raftery wrote in the criminal complaint.

Federal prosecutors have filed gun possession charges against one alleged Hells Angels member, Jaime Alvarez, though the criminal complaint seeks arrest warrants against two others — Kenneth Caspers Jr. and Dennis Killough Jr. — as well as Michael Mahoney, who is described as an “enforcer” for the group, but not a member. The complaint contains an undated picture of Mahoney wearing a Hells Angels vest that says “hangaround,” a status the club assigns to those who seek to become prospects, and eventually full-fledged members.

News of the investigation comes as three Hells Angels members are standing trial in a racketeering and murder case centering on the Hells Angels of Sonoma County. That case stems from a series of arrests in 2017, involves more than a dozen defendants and allegations that members of charters in Fresno, Sonoma, Boston, and elsewhere conspired to murder a Hells Angels sergeant-at-arms and dispose of his body through an illegal cremation. On Monday, a former Hells Angels prospect named Steve Kerhagen testified he infiltrated the group as an FBI informant, becoming one of three former prospects or members around the Bay Area to cooperate with authorities.

The complaint describes an October 2021 hours-long assault at the Vallejo clubhouse, where roughly a dozen Hells Angels allegedly pulverized two members of the Union Iron Workers Motorcycle Club, beating one for one hour and 50 minutes (that victim said he used a clock on the wall to time the beating), and a second into a “semi-conscious state.”

In that incident, the first victim was set to meet Hells Angels member at the clubhouse with others in his motorcycle club but decided to go early, by himself. When he did, he was attacked so extensively he suffered multiple broken ribs, and was told the beating would stop if he gave up the name of a second Union Iron Workers clubhouse member he’d been filmed talking to about motorcycle clubs that rival the Hells Angels, according to the complaint.

The man — named in court records only as “Victim 1” — promptly gave up the name of “Victim 2,” who was then lured to the club and assaulted in a similar fashion. Victim 1 was threatened by the unnamed president of the clubhouse that he’d be killed if he returned to Vallejo, but he eventually cooperated with police, the complaint says. Victim 2 claimed to have at best a patchy memory of the incident.

Caspers, Killough, Mahoney, and Alvarez are all named as alleged participants in the assaults, and Mahoney was linked to a 2021 incident in which he allegedly knocked out a man during a fight at Judy’s Wild Wrangler Saloon in Vacaville, according to the complaint. It is unclear what month in 2021 the bar fight took place.

Last Dec. 8, the FBI conducted a series of raids in Fairfield, Vacaville, and Vallejo, at the four men’s homes, and recovered more than a dozen firearms, including pistols and rifles with obliterated serial numbers, commonly known as “ghost guns.” They also found a sawed-off shotgun, a bullet proof vest, a billy club with a Hells Angels deathhead, more than 1,000 rounds of ammunition, and assault weapons that included an AK-47-style rifle, the complaint says.

All four men were arrested then released as part of the December raids. Shortly thereafter, a still-active GoFundMe page seeking to raise a defense fund for Killough, Mahoney, and Alvarez raised roughly $7,300 of the $30,000 it sought.

Alvarez was ordered detained at his first court appearance last week, records show. His attorney didn’t immediately respond to a request for comment. Mahoney, Killough, and Caspers are all out of custody.

SAN ANTONIO — The number of migrants who died after apparently being abandoned in a sweltering tractor-trailer in Texas rose to 50 on Tuesday in a suspected human-trafficking attempt now under investigation by the ...Read More

WASHINGTON — In testimony before a House panel Tuesday, former White House aide Cassidy Hutchinson outlined a stunning series of events surrounding the Capitol insurrection on Jan. 6, 2021, including an account that then...Read More

REDWOOD CITY, Calif. — Final arguments in Scott Peterson’s attempt to overturn his murder conviction were postponed Tuesday after one of his lawyers contracted COVID-19 and Peterson was put on “loose quarantine” at...Read More

The Brazilian Amazon is home to 13 of the country’s 30 most violent cities as drug trafficking is adding to environmental crimes that have traditionally plagued the region.

The number of intentional violent deaths in ...Read More

COVID-19 shots from Pfizer Inc. and Moderna Inc. should be updated to include components that target the highly transmissible omicron variant, the version of the virus that causes most of the world’s cases, U.S. ...Read More