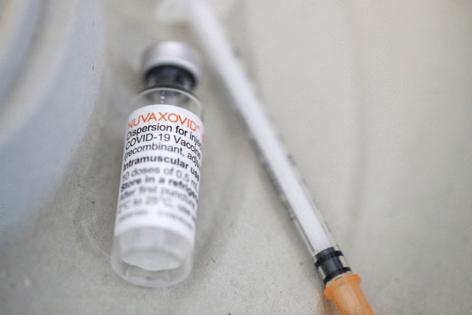 Since their debut just 18 months ago, three COVID-19 vaccines have saved an estimated 2.2 million American lives, changed the trajectory of a pandemic and inspired all manner of conspiracy theories.

Two of those shots prompt a recipient's own cells to manufacture a key piece of the coronavirus by following instructions encoded in messenger RNA, or mRNA for short. The vaccines developed by Pfizer and Moderna have revolutionized our approach to immunizations, and they've done so with blinding speed.

That's left many people yearning for something a bit more old-school.

A COVID-19 vaccine from Novavax could fit that bill. In a world of newfangled ideas about training the immune system to spot and defend against an invading virus, the Novavax vaccine does it the old-fashioned way: by introducing an exact replica of the coronavirus spike protein into the bloodstream to show the immune system what the invader looks like.

Add in an "adjuvant" — an immune-boosting substance made from the purified bark of a South American tree — and, voilà! You've got the type of vaccine Americans have been taking for years to protect against familiar scourges like influenza and shingles.

Yes, there are nanoparticles and synthetic "recombinant proteins" involved. Legions of precisely uniform spike particles are manufactured not inside chicken eggs but in the cells of the Army caterpillar. These are hallmarks of a 21st century vaccine, one that was developed and tested under the aegis of Operation Warp Speed.

But Novavax touts its technology as a "well-known and established platform" for building vaccines. It expects its product known as NVX-CoV2373 to be embraced by Americans who are still suspicious of the mRNA mainstays, or are disinclined to turn to them as boosters.

Those skeptics run the gamut, from people who think the mRNA vaccines were developed and tested too quickly to detect potential long-term side effects (a plausible concern) to those who believe they implant movement-tracking microchips into recipients' bodies (a fear without any supporting evidence). In between are folks worried about the vaccines' impact on fertility (current evidence shows no reason to be concerned) and those afraid that they alter a recipient's DNA permanently (not possible, since the vaccine doesn't enter a cell's nucleus, where DNA resides).

Some people "may prefer tried and true technologies" for COVID-19 vaccines, said Dr. Filip Dubovsky, the chief medical officer of Novavax. While declaring himself a fan of mRNA vaccine technology, he added that others "may not like the concept of ... turning their body into a little vaccine factory."

If made available, the Novavax vaccine might induce some of the millions of still-unvaccinated Americans to roll up their sleeves at last. "And when everybody gets vaccinated thoroughly, that's when we get to tamp down" the coronavirus' spread, he said.