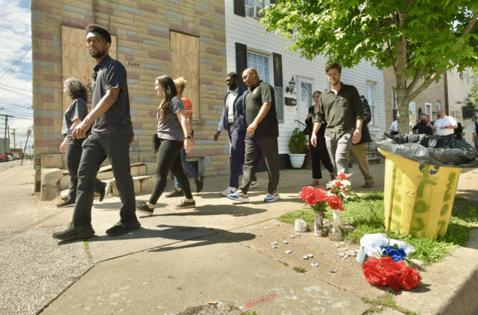 BALTIMORE — The latest deadly shooting in the Brooklyn area of Baltimore unfolded April 29 outside a boarded-up vacant rowhouse on Fifth Street — where candles, flowers and empty liquor bottles memorialize the young father gunned down that night.

Around the corner on Cambria Street, another blighted property has prompted complaints from residents about people trespassing, gaining access to the building through a second-floor window and leaving disabled vehicles in an adjacent lot. Across the street, an unsecured alley provides easy access and potential hiding spots.

Baltimore Mayor Brandon Scott canvassed the area Thursday afternoon, along with housing officials, representatives from the local nonprofit Greater Baybrook Alliance and others involved in launching a new pilot program aimed at reducing crime through environmental modifications. The nonprofit focuses on the neighborhoods of Brooklyn, Brooklyn Park and Curtis Bay.

Scott said the relationship between crime and the physical environment is obvious.

“There’s no place where it’s more evident than right here, in this neighborhood struggling with violence,” he said, standing at the corner of Fifth Street and East Patapsco Avenue.

The initiative, which will be funded by COVID-relief dollars, comes amid rising violent crime in Brooklyn, Cherry Hill and other south Baltimore neighborhoods. Officials said the program grew out of another pilot program in the area — a Neighborhood Policing Plan, which seeks community input to create a neighborhood-specific approach to increasing public safety.

In Brooklyn alone, four people were killed during the last two weeks of April, prompting serious concern among residents and elected officials that the violence had gotten out of control. The neighborhood has experienced nine deadly shootings already this year, the same number recorded throughout all of 2021, according to records maintained by The Baltimore Sun. The latest victim was Justin Lewis, 22, the young man killed in the 3600 block of Fifth Street.

In Cherry Hill earlier this month, three suspects carjacked a plainclothes Baltimore Police detective outside a convenience store, threatening the officer with a gun and stealing his unmarked patrol car, which they crashed a short distance away on the other side of the Hanover Street Bridge.

And after 10 people were injured in shootings across the city on Monday, officials again decried the increasingly brazen nature of violent crime in Baltimore.