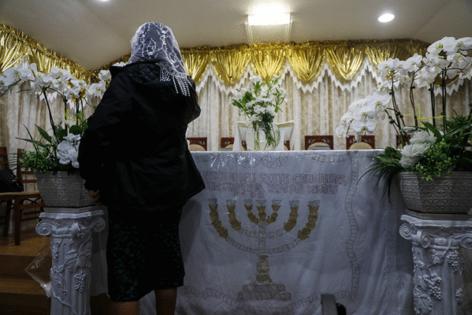 SAN JOSE — The grandfather and uncle of a three-year-old girl killed last fall in an alleged exorcism were arrested this week on suspicion of her death, according to authorities.

San Jose residents 19-year-old Rene Hernandez-Santos, the victim’s uncle, and 59-year-old Rene Trigueros Hernandez, the victim’s grandfather, were arrested Wednesday on charges of child abuse leading to the death of a child, the San Jose Police Department said in a Friday news release. The girl’s mother, Claudia Hernandez, 25, who was arrested Jan. 31 and charged with child abuse leading to the death of the girl, Arely Naomi Proctor.

On Sept. 24, 2021, at about 8:12 p.m., police responded to the 1000 block of South Second Street to a report of a death of a 3-year-old girl. The location is a house with a church located on the property. Officers arrived at the scene and found the girl unresponsive on the church’s floor. They tried to save her life and she was taken to a local hospital, where she was pronounced dead.

Authorities said Claudia Hernandez started to believe her daughter was possessed on Sept. 23, 2021, because the girl would “wake up and cry periodically.” Claudia Hernandez prayed with the girl’s uncle while withholding food from her.

Claudia Hernandez and the victim’s uncle allegedly took the girl to the church and began the exorcism, according to court documents. They were joined by the victim’s grandfather.

Claudia Hernandez allegedly tried to force the girl to vomit, at times going so far as to stick a finger down the girl’s throat and squeeze her neck, believing it would drive any spirits from her daughter’s body, according to the court documents. All three people — Claudia Hernandez, her father and her daughter’s uncle — took turns trying to force Arely to vomit, alternating positions by holding her neck, her abdomen and her legs, the documents say.

The girl’s grandfather — who identified himself to this news organization as Rene Huezo — is the pastor of the Iglesia Apostoles y Profetas church, where police found Proctor unresponsive. He confirmed to the Bay Area News Group last week that he performed a ceremony on the child to “liberate her of her evil spirits.” Huezo said he didn’t wish to discuss the details of the exorcism but said Arely was asleep when she got to the church and the ceremony took two hours. The girl wasn’t screaming or showing signs of distress, he said.

“If you read the Bible, you’ll see that Jesus casts away demons and made sick people healthy again,” he said. “It’s not when I want to do it, it’s when God, in his will, wants to heal the person. The preacher is like an instrument of God; what we do is what God says.”

WASHINGTON — The U.S. will reestablish a permanent troop presence in Somalia to counter the al-Shabab terrorist group, reversing a decision by former President Donald Trump to withdraw the roughly 750 special operations ...Read More

One in 9 hospitalized COVID-19 patients die or get readmitted to the hospital within 30 days of being sent home, a new study has found.

MIAMI — In what appears to be a first in more than six decades, the U.S. has authorized an American company to finance and invest in a private business in Cuba, an unprecedented move that could open the gate to American ...Read More