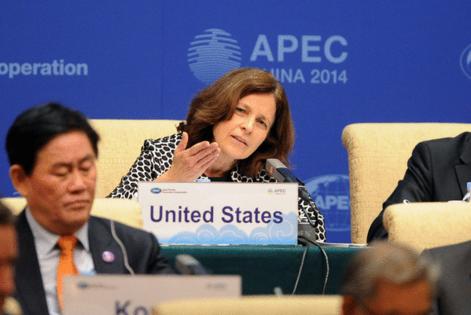 President Joe Biden picked Sarah Bloom Raskin to be the Federal Reserve’s top banking regulator and economists Lisa Cook and Philip Jefferson to be governors completing his overhaul of leadership at the U.S. central bank.

The White House announced the nominations on Friday. The selections of Cook, who would be the first Black woman on the Fed’s board, and Jefferson, who would be the fourth Black man, keep a Biden promise to improve diversity at the central bank. If all three are confirmed by the Senate, it would mark two firsts for the seven-member panel: four women serving together, and two Black governors at the same time.

The nominations also would add experts focused on a broad recovery in the job market as officials seek to contain the hottest inflation in nearly four decades.

“This is a moment that calls for sound, independent leadership from the Board of Governors at the Federal Reserve,” Biden said in an e-mailed statement announcing the picks, adding that Raskin, Cook and Jefferson “will bring a breadth of knowledge, experience and expertise” to the Fed and help keep the U.S. “on a path to a strong, sustainable recovery.”

The three potential new Board members are in a position to join Jerome Powell — whom Biden chose in November for another four years as chair — and current Governor Lael Brainard, who the president aims to elevate to vice chair. Both Powell and Brainard testified this week in confirmation hearings before the Senate Banking Committee.

The newly configured Fed Board faces a challenging year ahead, with the ongoing pandemic restraining the economic recovery and contributing to soaring inflation. Investors expect the Fed to start raising interest rates from near-zero levels in March.

While making history with Cook’s nomination, the selection of Raskin to the vice chair for supervision position means the top three positions on Biden’s Fed would still all be held by White officials.

Raskin’s nomination as vice chair for supervision responds to progressive demands for someone who will bring a more pro-regulatory posture to the position than her predecessor, Randal Quarles, who was roundly criticized by Democrats as being too lenient on Wall Street.

Democrats such as Senator Elizabeth Warren of Massachusetts and progressive groups have had a keen interest in who fills the job, publicly calling for somebody who would stand up to megabanks.

The supervision vice chair is Washington’s premier banking overseer, established by the Dodd-Frank Act after the 2008 financial crisis. The official leads the oversight of financial institutions such as JPMorgan Chase & Co. and Goldman Sachs Group Inc. and will likely influence decisions from bank capital rules to how to police the cryptocurrency industry.