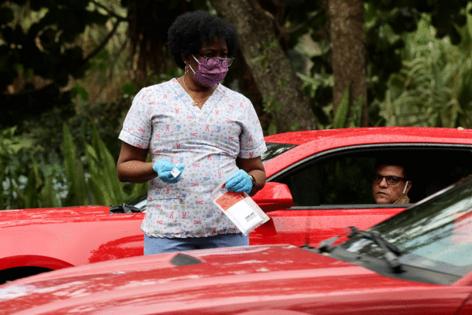 MIAMI — Florida’s rocketing number of COVID-19 cases likely will peak by mid-January as the highly contagious omicron variant potentially infects most of the state’s population during this wave alone, according to disease modelers with the University of Florida’s Emerging Pathogens Institute.

UF biostatisticians and scientists said they revised their forecast for the state’s omicron wave to account for the astonishing speed and breadth with which the virus was spreading through Florida in December, leading to record numbers of COVID-19 cases during the state’s fourth wave of the pandemic.

The university’s model still calls for omicron to cause fewer deaths than prior surges of the pandemic, and like past waves this one is expected to diminish with the same speed that it spiked — making for possibly one of the shortest though still devastating waves of the pandemic.

“Everything points to much faster dynamics than we saw at first,” said Ira Longini, a UF professor of biostatistics and co-creator of the university’s omicron model.

To account for what they were seeing in Florida and the United States in December, UF scientists shortened the model’s projection for omicron’s incubation period to about three days instead of five days, which means that an infected person can begin spreading the virus about two days after contracting the virus, regardless of whether or not they have symptoms.

“If they’re going to get symptoms, on average it’s on the third day of their infection,” Longini said. “So by then they’ve already been transmitting it for a whole day while they were still asymptomatic.”

By comparison, the delta variant has an incubation period of about four days, which is faster than the median of five or more days seen in the original version of the virus, according to a recent report from the Centers for Disease Control and Prevention.

Florida reported the state’s first known case of the omicron variant on Dec. 6, and as the virus spread rapidly UF scientists quickly began to understand why the strain was causing an exponential growth in infections and reported cases, said Thomas Hladish, a research scientist in UF’s department of biology and a co-author of the model.

“The increase was so pronounced that as soon as we had like two days of data about that increase, we could have at that point said quite a bit,” Hladish said. “Most of what we would have needed to know we would have known.”