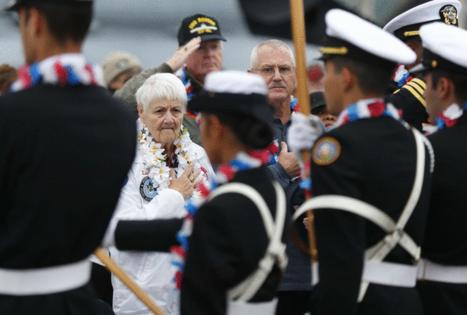 For the first time in the event's almost two-decade history, no Pearl Harbor survivors attended. Hardly any of them are still alive in a region that once had hundreds.

Instead, the focus was on the survivors' survivors, the offspring who have picked up the torch of remembrance for one of the most pivotal events in American history: the Dec. 7, 1941, surprise aerial assault by Japan that killed 2,400 Americans, injured 1,200 others, decimated the Pacific Fleet, and pushed the United States into World War II.

"This is the best way for me to honor my father, by making sure people never forget," said Kathleen Chavez, daughter of Ray Chavez, who was quartermaster on the minesweeper Condor during the attack. He died in 2018 at age 106.

Kathleen Chavez and a half-dozen relatives of other survivors stepped forward during the 30-minute ceremony for one of its emotional high points, the tossing of a wreath into the water from the Midway's flight deck. They were part of a crowd of about 200 people who were on the carrier to mark the 80th anniversary of Pearl Harbor.

For Patrick Schenkelberg, this was the first commemoration without his father, Clayton, who died in April at age 103. They'd attended the Midway gathering for about 10 years straight. The elder Schenkelberg was a torpedoman at a Navy submarine base when the Japanese planes swooped in.

"It's really hard," his son said, tearing up. "When we were driving here, I thought about dad and what all this meant to him. Now it's up to us to carry on. It's why I'm here."

About 50,000 U.S. service members were on Oahu when it was attacked, and no one knows how many are still alive. There is no official list. It's probably in the low hundreds now, if not double digits.

They first started making their presence felt in the late 1950s when they formed the Pearl Harbor Survivors Association. At its peak, it had about 30,000 members in dozens of cities across the U.S.

San Diego, with long ties to the military, had what was believed to be the largest chapter: almost 600 members. It was uncommonly influential, too, badgering Navy officials into swallowing their pride and naming a ship after Pearl Harbor. The vessel is a dock landing ship, based here.