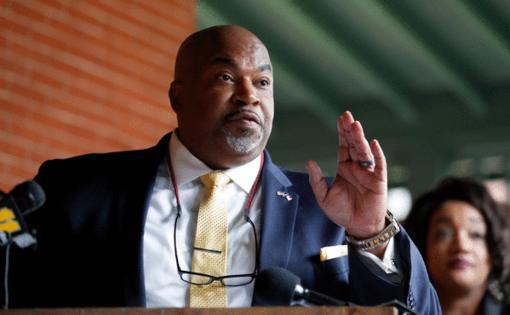 “Inclusive” and “LGBTQ-friendly” aren’t words that typically come to mind when people think of the Republican Party.

But there are some conservatives who think that can change.

“I think that it is important that in North Carolina as a party, we kind of take the playbook that the national party and President Trump has been using, which is that LGBT people are valued and wanted within the Republican Party,” said Kyle Luebke, president of the North Carolina chapter of Log Cabin Republicans, a national organization that represents LGBTQ+ conservatives and their allies.

Of course, that’s not the playbook that Lt. Gov. Mark Robinson has been using. Robinson, the state’s highest-ranking Republican, has said heterosexual couples are “superior” to gay couples and called “transgenderism” and homosexuality “filth” on two separate occasions this year. Log Cabin Republicans of North Carolina has repeatedly criticized Robinson’s remarks, saying they “give fuel to the media and the Left’s false attacks that President Trump and the GOP are ‘anti-LGBT.’”

“I do not feel as though he has dignified the office of lieutenant governor and represented the Republican Party well with his comments,” Luebke said.

But Republican lawmakers, particularly in North Carolina, have done very little to show that they aren’t anti-LGBT.

They are the ones who enacted the infamous "bathroom bill" House Bill 2 just five years ago, and only legalized same-sex marriage in 2014 when a judge told them they had to. And, although they aren’t legally enforceable anymore, there’s still an amendment that outlaws same-sex marriage in the state constitution, and anti-sodomy laws on the books. Many Republican lawmakers continue to push anti-LGBTQ bills in the state legislature today, and, as of 2020, the North Carolina Republican Party’s platform still contains language stating that marriage should only be between a man and a woman.

And Robinson, who claims he was talking about “education,” is still defending his remarks, even confronting a Democratic lawmaker who was critical of him in a speech on the Senate floor. Meanwhile, the NCGOP has indicated it stands by him, and elected officials in his party have made no effort to distance themselves from him publicly. Some might interpret that as a de facto endorsement (or tolerance, anyway) of his rhetoric.

“North Carolinians deserve to feel safe expressing their full humanity. If Republican lawmakers disagree with Lt. Governor Mark Robinson’s recent vitriolic remarks against the LGBTQ+ community, they ought to speak up and speak out. Hate has no place in our state and we challenge our lawmakers to show up for all their constituents,” Kendra R. Johnson, executive director of Equality North Carolina, said.

The antithesis of hatred and bigotry isn’t silence, or even muted disagreement. That’s not good enough. It’s open acceptance of the LGBTQ+ community and the introduction of policies that protect them, which is something that very few elected Republicans in North Carolina have done. Many of North Carolina’s largest municipalities have enacted nondiscrimination ordinances to protect LGBTQ+ people since the state’s ban on such ordinances sunset last winter (Charlotte, for example, did so with local Republican support), but there are still very few statewide protections for sexual orientation and gender identity. Those protections are something the Log Cabin Republicans are in favor of.

Robinson is by no means an aberration. For too long, the rhetoric he espouses has been a spoken and unspoken norm, both inside the Republican Party and out. It’s nice to know that there are conservatives who don’t buy what Mark Robinson is selling, but they’re nowhere to be found in the state legislature.

“Both parties have never been really great to the LGBT community,” Luebke said. “The Democratic Party got there sooner than the Republican Party, but it took activists decades in the Democratic Party, to get them to a place where LGBT people were accepted in that party. So, you know, long row to hoe.”