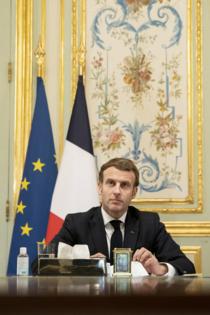 Macron told reporters in Jeddah that he and the kingdom’s de facto ruler, Crown Prince Mohammed bin Salman, had called Lebanese Prime Minister Najib Mikati together “to send a clear message that Saudia Arabia and France want to fully engage to support the Lebanese people.”

The French leader said they would do everything possible to help Lebanon reopen its economy and would act urgently to help its people.

In a statement on Twitter, Mikati said the conversation was “an important step to restoring the historic fraternal relations with Saudi Arabia.”

Cordahi stepped down on Friday, saying that France had sought his resignation ahead of Macron’s trip, opening the way for the initiative.

Macron said that France and Saudi Arabia want Lebanon’s government “to be able to work in a normal way” and called on Beirut to implement “useful reforms.” He said he would call Lebanese President Michel Aoun on Sunday with the same message that he and Prince Mohammed conveyed to Mikati.

Asked if he had the impression that Saudi Arabia will now re-engage financially in Lebanon, Macron replied: “Yes, this was the commitment made to France and this is what we decided together.”

Macron traveled to the Gulf and met with Prince Mohammed despite criticism over the kingdom’s human rights record, and one reason given was Lebanon. Shoring up the country following the catastrophic blast that ripped through the Beirut port in 2020 is one of Macron’s foreign policy priorities, and the Saudis are key players.