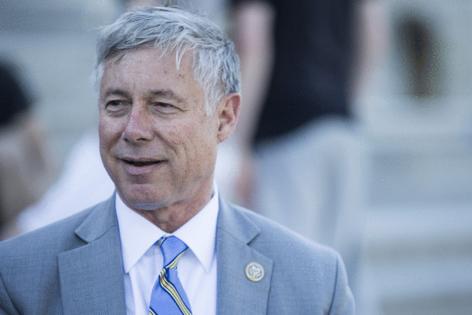 WASHINGTON — Michigan Republican U.S. Rep. Fred Upton sought out his colleague, Rep. Ilhan Omar, on the House floor this week to express solidarity after they both received "nasty" death threats in recent weeks, he said.

Upton noted it was the first time he'd ever spoken to Omar, a Democrat from Minnesota who is often the target of other Republicans in Upton's conference.

"I said, 'I don't know you all that well. We've never talked...You can't see my smile, but I'm smiling behind this mask,'" Upton said, recalling the conversation during a Friday interview with Washington Post Live.

He jokingly told Omar that he wondered if the same man who left him a death threat last month was the same who had left her a threatening voicemail this week, because he "used the same words against me."

"'I wonder if it's the same person?'" Upton said lightheartedly. "So she started laughing. We had a good conversation. You got to sort of put it in that light. But on the seriousness of stuff, I'm really afraid someone's gonna get hurt."

Upton has reported he received a number of threats after he was one of 13 House Republicans last month to vote for the bipartisan infrastructure package. The threats came in after another Republican colleague, Marjorie Taylor Greene of Georgia, publicly posted the names and phone numbers of Upton and other GOP members who voted in support of the bill, calling them "traitors."

Upton sought out Omar the day after she held a news conference where she played a recording of a threatening voicemail for reporters: "We see you Muslim sand-n--- bitch, we know what you're up to. You're all about taking over our country. ... You jihadist. We know what you are. You're a f---ing traitor. You will not live much longer."

Omar's threat followed clashes with Rep. Lauren Boebert, R-Colo., over her Islamaphobic comments about Omar — one of three Muslim members of Congress.

"We can disagree on the issues, and we do even within our own caucus, but it doesn't mean you have to be disagreeable," Upton told the Post. "And when you have some bomb-throwers on both sides that are really nasty, that's unfortunate because that, frankly, gives Congress a pretty bad name."

Rep. Debbie Dingell, D-Mich., was present for the Upton-Omar conversation on the House floor and said the point was how no member of Congress should treat threats as acceptable behavior.