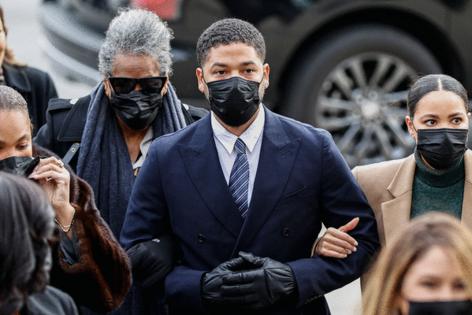 Actor Jussie Smollett is facing a criminal trial this week in a case involving as many plot twists as featured on his former Fox music TV drama, "Empire."

The long-standing case, which began jury selection on Monday, stems from a Jan. 29, 2019, incident in which the actor reported to Chicago police that he was a victim of a racist and homophobic attack while walking in his affluent Chicago neighborhood. He alleged that on that frigid night, two assailants beat him and put a rope around his neck.

But as details emerged, Smollett was accused of orchestrating the attack.

With Smollett back in the spotlight, here are some questions and answers to get you caught up on the protracted case.

Who is Jussie Smollett?

The embattled artist is a 39-year-old actor and musician whose star was on the rise when he was allegedly attacked in 2019. (He performed at the Troubadour in West Hollywood just days after the alleged assault, telling the sold-out crowd, "I'm OK.")

He's the brother of actor Jurnee Smollett ("Lovecraft Country," "Birds of Prey") and appeared in "The Mighty Ducks" and "Alien: Covenant" movies and the "Underground" TV series. He most famously played the groundbreaking role of Jamal Lyon on the Fox series "Empire" until he was unceremoniously dismissed from the music drama as legal issues mounted around him.

The actor, whose "Empire" character was an openly gay musician, is also an out Black man and has advocated for LGBTQ rights throughout his career. That is, until public opinion turned against him and tarnished his personal and professional prospects.