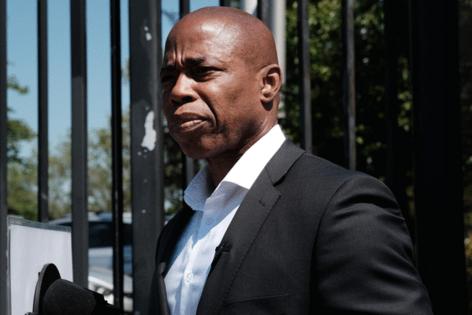 Mayor-elect Eric Adams confirmed Monday that he’s bound for Africa — and declared that his time as a police officer has rendered him unafraid of traveling to the continent despite international concern over a new coronavirus variant first detected there.

“I’m not afraid of anything. I’m an ex-cop. I’m ready to lead my city,” Adams, a retired NYPD captain, told the Daily News after being asked whether he was concerned about traveling to Ghana later in the day as New Yorkers brace for omicron, a new variant of COVID-19 first reported in southern Africa.

Omicron has not yet been reported in New York, but public health experts say it’s likely only a matter of time before it arrives, and President Biden’s administration has banned travel from eight southern African nations to curb the potential spread.

Meantime, researchers fear omicron could be far more contagious than other COVID-19 strains — and potentially resistant to available vaccines, with cases popping up across the world in recent days.

Still, Adams said he’s moving ahead with his Ghana trip to fulfill a long-planned pledge of visiting the West African nation to mark the 400th anniversary of slavery in the U.S.

“This is a spiritual journey for me. My ancestors came over here in the bottom of slave ships, and 400 years later, I’m the mayor of one of the most important cities, the city of New York. I’m going there to pray. I’m going there to do some spiritual cleansing,” Adams said, speaking following an unrelated press conference in Brooklyn. “The people of Ghana — just like Obama when he ran for president — they’re waiting for me to go. I’m making a connection with my ancestry.”

Adams, who will become the second Black mayor in city history when he’s sworn in on Jan. 1, said he plans to stay in Ghana through Dec. 8.

Adams noted that his trip complies with current federal public health guidance — Ghana is not among the countries covered by the Biden administration’s travel restrictions — and noted that he recently received a booster shot on top of his full vaccination against COVID-19.

“I have said time and time again that I will follow the science and our public health professionals as a leader — and right now travel is banned only to southern African countries out of an abundance of caution,” he said. “Should the federal government change their guidance on travel, I will immediately follow it. Meanwhile, New Yorkers must remain vigilant about preventing the spread of COVID, including wearing masks and getting their vaccines and booster shots.”