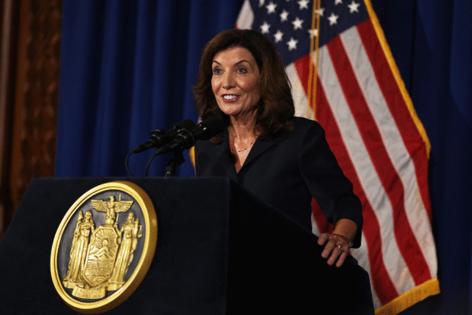 The city’s positive test rate rose to a two-month high as hospitals admitted more than 100 new virus patients on Friday, contributing to a 25% jump in hospitalizations in just two weeks.

The city has 463 people in the hospital for COVID-19, up from 370 on Nov. 12. The seven-day average of residents testing positive for the virus — the lowest in the state of New York — has climbed above 2% for the first time since the end of September. That metric doesn’t include rapid antigen test results.

Governor Kathy Hochul declared a state of emergency late Friday just as countries including the U.S. began imposing travel restrictions from southern Africa to stem the spread of the new variant. While the variant known as omicron hasn’t been found in the U.S., Hochul warned, “it’s coming.”

On Saturday, she also ordered nursing homes and adult-care facilities to make boosters available to all residents as hospitalizations across the state spiked.

The governor on Saturday reported 2,696 people in hospitals because of the virus, up from 2,249 a week earlier.

Several parts of the state are reporting higher positivity rates: 10.2% in western New York; 9.4% in the Finger Lakes and 9.3% in the Mohawk Valley.

“With the emergence of the omicron variant abroad and warning signs of spikes in cases this winter, the need for basic COVID safety procedures here in New York is more important than ever,” Hochul said in a statement.

Anthony Fauci, President Joe Biden’s chief medical adviser, said Sunday that the new variant appears to be more transmissible and will “inevitably” arrive in the U.S.

Biden last week restricted U.S. travel links with South Africa and seven other countries in the region starting Monday. The president is returning to the White House later Sunday from a long holiday weekend as U.S. health officials gauge the risks of the new variant.