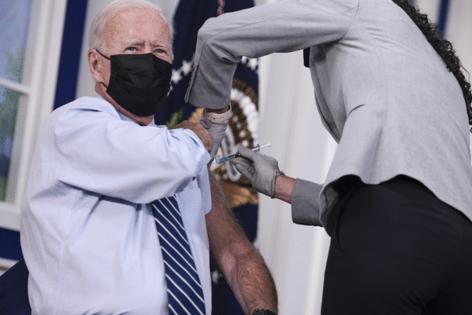 LOS ANGELES — Public health officials have been struggling to persuade eligible Americans to get their COVID-19 booster shots. New research could help them make the case that the extra dose will provide substantially more protection — even if they’ve also recovered from a coronavirus infection.

A small study that’s among the first to track people’s protective antibodies over time found that those who were immunized against COVID-19 with two doses of an mRNA vaccine and received a booster shot about eight months later saw their levels of neutralizing antibodies skyrocket.

Among this group of 33 fully vaccinated and boosted people, the median level of these antibodies was 23 times higher one week after the booster shot than it had been just before the tune-up dose.

What’s more, their median post-booster antibody level was three times higher than was typical for another group of people whose antibodies were measured a few weeks after getting their second dose of vaccine, when they’re close to their peak. And it was 53 times higher than that of a group of 76 unvaccinated people who had recovered from COVID-19 just two to six weeks earlier.

Even compared to a group of 73 people who had weathered a bout with COVID-19and went on to get two doses of an mRNA vaccine, the boosted group’s median antibody level was 68% higher.

Study leader Alexis Demonbreun, a cell biologist at Northwestern University’s Feinberg School of Medicine, said the data demonstrate that no matter how well protected a vaccinated person may think she is, getting a booster shot is likely to increase her neutralizing antibodies — and with it, her immunity — considerably. And because scientists expect large antibody responses to create more durable immunity, the protection afforded by the booster should last longer than the initial two-shot regimen did.

“If I was going to Vegas, I’d bet on the booster rather than getting the virus to protect me,” Demonbreun said.

The authors measured antibodies that lock onto a key component of the coronavirus spike protein called the receptor-binding domain, which the virus relies on to latch onto a host cell and force its way inside. In tests, they confirmed these antibodies were capable of keeping the virus out of the specific cells it attempts to invade.

While only 33 people were tested before and after getting a booster, their post-boost antibodies were compared to those of 941 people whose levels had been tested already. Everyone who was vaccinated had received one of the mRNA options, made either by Pfizer and BioNTech or Moderna.