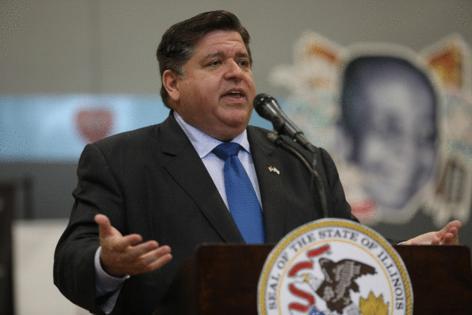 CHICAGO — During the brief debate over a $42 billion state spending plan introduced in the closing hours of this year’s spring session, the Illinois Legislature’s Democratic majority outlined less than $3 billion in spending in the coming year from a massive infusion of federal coronavirus relief money.

With the state in line to receive $8.1 billion from President Joe Biden’s American Rescue Plan, Democrats said they wanted to spend the money judiciously and avoid creating programs that would continue to demand funding after the one-time federal cash influx was gone. They said this year’s plan for the relief money called for $1 billion in infrastructure spending, with the remainder going to items such as hospitals, violence prevention, and tourism and business recovery.

Left unmentioned as lawmakers were approving the budget, however, was the creation of a state fund that gives Gov. J.B. Pritzker authority to spend billions of dollars from the federal aid without first getting approval from lawmakers.

In the end, the state’s spending plan for the budget year that began July 1 counts on using at least another $2 billion from the pandemic relief funds to make up for “lost revenues,” leaving less than $3.6 billion to budget out over the next three years.

The Pritzker administration says the governor is allowed to unilaterally dip into the large pool of money under federal rules that weren’t yet finalized as lawmakers were approving the budget.

Using the funds this way also is necessary in efforts to put the state’s finances on a stable long-term trajectory as Illinois emerges from the pandemic, the administration says, noting that its financial maneuvers have led to credit upgrades from two Wall Street ratings agencies and an improved outlook from a third.

Allowing the governor to tap into the money without an appropriation by lawmakers ensured “flexibility for the state to adapt to the rules as understanding of them evolved over the course of the year,” Pritzker spokeswoman Jordan Abudayyeh said.

But members of the General Assembly’s Republican minority are calling for greater transparency and more input from lawmakers on how the money is spent.

After the Democrats’ final budget plan was introduced May 31, there was no discussion in committee or on the House floor about creating a fund that would allow Pritzker to spend a portion of the federal money without an appropriation from the Legislature, said state Rep. Tom Demmer of Dixon, a lead budget negotiator for the House GOP.

Neither was the provision mentioned in an even briefer debate before the Senate voted on the budget package in the early morning hours of June 1.

When budgets are introduced just hours before a final vote, “you don’t see this kind of thing,” Demmer said. “And it turns out, they create this fund that really gives the governor authority to make multibillion-dollar decisions without any notification or input from the General Assembly.”

Lawmakers aren’t scheduled to return to Springfield until after the new year, and Democrats seldom need Republican votes to pass legislation.

But Demmer has introduced a proposal that would require the governor to inform legislative leaders in both parties before he spends money from the special fund and ultimately get approval from lawmakers for any outlay. The money would have to be repaid from the general fund if legislators don’t approve.

Pritzker’s plans for the additional $2 billion in spending were easy to overlook.

A June 21 document from the governor’s budget office breaks down $2.8 billion in COVID-19 relief spending in the current year makes but no mention of the other money. Neither does the administration’s initial August report to the federal government on the state’s recovery plan.

“These reports focused on identified projects that will be funded by state fiscal recovery funds while other amounts are still preliminary,” Abudayyeh said in an emailed response to questions. “Additional reporting on expenditures of revenue replacement dollars will be provided to U.S. Treasury pursuant to their reporting requirements which are still evolving.”

There was a mention of “$2-$3 billion to replace lost revenues to the state to fund essential government services” in a news release from the governor’s office the day he enacted the spending plan.

The governor’s budget office also provides monthly reports on spending of the federal relief funds to the Legislative Budget Oversight Commission and testifies before the bipartisan panel quarterly.

Using a Treasury Department formula that takes into account pre-pandemic growth, the governor’s office determined the state revenues were roughly $3 billion less in 2020 than they would have been absent the coronavirus-induced slowdown, Abudayyeh said. The federal rules permit the state to use the relief money to make up for that lost revenue, as long as it’s spent on government services that are allowed in the American Rescue Plan.

States can’t use the relief money to pay off most debts or make deposits into pension plans — both major drawbacks for chronically cash-strapped Illinois.

But budgeting $2 billion in coronavirus aid to cover allowable expenses essentially frees up that much cash to pay down debts for which the federal funds can’t be used.

As a result, the state expects to be able repay $1 billion remaining from the $3.2 billion it borrowed from a special Federal Reserve program designed to help governments weather the pandemic and more $900 million borrowed from other accounts within the state treasury. Those moves will increase overall expenditures from the state’s general fund this year to $44 billion.

Demmer said that without the additional $2 billion from the federal pot, Democrats would’ve had to either reduce spending in other areas or hold off on repaying debts.

“It seems like it could be a shell game to cover the borrowing because without that, it doesn’t work,” Demmer said.

But from the perspective of ratings agencies that grade the state’s creditworthiness, that’s an acceptable use of the relief money.

“With this initial allocation, the state appears to have avoided the use of (American Rescue Plan Act) aid for any material ongoing program costs in this budget,” Fitch Ratings wrote in a note last week.

Fitch is the one major ratings agency that has not upgraded the state this year. It has maintained its rating of the state’s credit at one notch above junk bond status, noting that yawning gaps in pension funding and other structural issues remain.

Despite those challenges, Fitch also maintains a positive outlook for the state’s finances.

The firm gave Pritzker high marks for planning to use a projected surplus in the current year to help pay down the state’s bill backlog and shore up its rainy-day fund, cautioning that revenue estimates, while “realistic,” are “subject to pandemic-driven uncertainty.”

As for its spending plans for the federal aid, Fitch wrote that lawmakers “focused on one-time investments rather than recurring operating needs,” adding that the firm “will carefully assess the state’s plans” for the remaining funds.

As of Tuesday, Pritzker had directed $500 million in federal relief money to the special fund under his authority. Of that, nearly $144 million had been spent to reimburse the state’s general fund “for operational costs of Department of Corrections and Department of Juvenile Justice” during the previous budget year, Abudayyeh said.