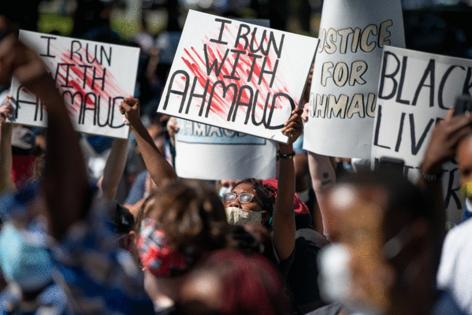 ATLANTA — As jury selection continues in the trial over Ahmaud Arbery’s death, lawyers for the three defendants expressed concern over whether demonstrations near the courthouse could intimidate potential jurors. The trial judge says prohibiting such demonstrations would violate the First Amendment.

On Tuesday, Judge Timothy Walmsley denied a defense motion filed to bar groups from gathering near the courthouse. Kevin Gough, the attorney defending William “Roddie” Bryan, filed the motion saying such gatherings would make it difficult to ensure his client gets a fair trial.

“If there’s any evidence out there that would suggest that there’s been any effort — conscious or unconscious — to tamper with this jury or influence these jurors, whether here on the courthouse steps this morning, or in Black media, the state has an obligation to pursue it,” Gough said Monday while addressing the court.

Ahmaud Arbery, an unarmed 25-year-old, was shot and killed by Travis McMichael in a neighborhood outside Brunswick on Feb. 23, 2020. McMichael, and his father, Greg McMichael, were both armed and riding in a pickup truck when they began chasing Arbery as he ran through their neighborhood after leaving a house nearby that was under construction. The McMichaels contend they were relying on Georgia’s then-existing citizen’s arrest law to detain Arbery, who they suspected in a string of neighborhood break-ins.

Bryan, a neighbor, soon joined the chase in his own pickup truck and filmed the cellphone video of the final moments of Arbery’s life. When the two pickups hemmed in Arbery, he charged at Travis McMichael and was shot three times at close range as he tried to take his shotgun.

The shooting thrust the Brunswick area into a national spotlight, drawing outrage from activists and galvanizing state authorities and legislators. The death was followed by demonstrations as droves of protesters stood against what they said was a racially motivated shooting that had happened in broad daylight.

Jury selection in the case began on Oct. 18 and stretched into the following week. The defense counsel said having public gatherings during jury selection may sway prospective jurors in one direction or another.

“The ‘carnival like’ or ‘circus like’ atmosphere outside the Glynn County Courthouse last, as well documented in the mainstream media, cannot continue without violating defendant’s rights to due process and a fair trial,” the motion filed by Gough said in part.

The motion referenced a series of animated gatherings that took place in the public courtyard adjacent to the courthouse during the first week of jury selection. On Oct. 18, a crowd of ministers, members of Glynn Clergy for Equity, the NAACP and community supporters gathered to exchange hugs and handshakes, then began to sing.

Trevor Thomas, a member of the Saint Mark’s High School choir, led the crowd through the first verse of “Lift Every Voice and Sing,” known in the African-American community as the Black National Anthem. The assembly moved from the courtyard to the steps of the courthouse and repeated the verse, softening their song to a hum as Pastor John Perry of Mt. Sinai Missionary Baptist Church led them in a prayer.