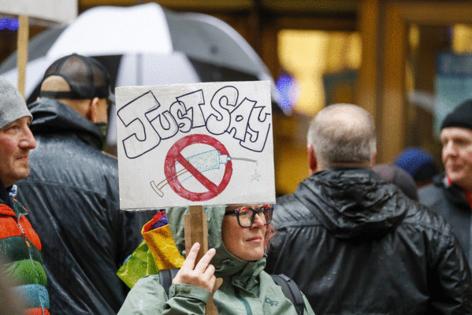 CHICAGO — A federal judge on Tuesday said he was “puzzled” by an emergency request by more than 100 Chicago firefighters and other city employees seeking a freeze on vaccine mandate orders by Mayor Lori Lightfoot and Gov. J.B. Pritzker.

The 130 plaintiffs named in the federal suit, mostly Chicago firefighters and paramedics, are asking U.S. District Judge John Lee for a temporary restraining order that would halt the city’s requirement that all city workers report their vaccination status or risk being put on no-pay status.

During Tuesday’s 45-minute hearing, which was held by videoconference, Lee asked several pointed questions to plaintiffs’ attorney Jonathan Lubin, including why forcing employees to disclose their vaccination status was even a constitutional issue at all.

“I look puzzled because I am puzzled,” Lee said. “Because don’t we have to disclose medical information for all sorts of different jobs? Why is this any different?”

In his response, Lubin started to argue that the “political nature” of the vaccine debate with COVID-19 could not be divorced from the legal issues — but the judge cut him off.

“I don’t care about the political,” Lee said. “This is a court of law.”

Lee gave Lubin two days to file a response to his questions in writing and said he planned to rule on the request Friday afternoon.

A temporary restraining order is a high legal hurdle to clear under most circumstances, and recent case law suggests the bid for one here is a long shot at best.

Just two months ago, the Chicago-based U.S. 7th Circuit Court of Appeals upheld Indiana University’s requirement that on-campus students be vaccinated, writing that students who don’t like the policy are free to seek educational opportunities elsewhere. The U.S. Supreme Court declined to hear an emergency appeal of that ruling.