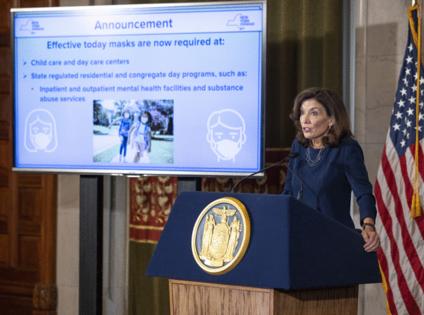 ALBANY, N.Y. — Gov. Kathy Hochul says she’s making good on her promise to turn the page from the Cuomo era and root out harassment and discrimination in state government.

State workers will be required to take a new live training program as a way to guard against inappropriate behavior and bullying and an independent law firm will be free to probe claims made from within the Executive Chamber, Hochul announced in a video released Monday by her office.

“From the moment I took office, I’ve made it a priority to radically change the culture in Albany politics and promote a respectful and collaborative environment as we serve the people of New York,” said Hochul. “Everyone has the right to a workplace completely free of unlawful discrimination or harassment.”

The ethics overhauls come two months after Hochul took over for former Gov. Andrew Cuomo, who resigned amid sexual harassment allegations and a scathing report from the attorney general’s office that determined he presided over a “toxic workplace.”

Independent investigators hired by Attorney General James’ office found that Cuomo and top officials in his administration fostered a “toxic” workplace that enabled “harassment to occur and created a hostile work environment.”

It also detailed how a top aide admitted to signing off on Cuomo’s mandatory sexual harassment training forms in 2019 and other employees said they heard the former leader allowed underlings to complete the training on his behalf.

The disgraced governor has denied any wrongdoing despite stepping down to avoid being impeached.

In the wake of Cuomo’s scandals, Hochul made reforming workplace culture and overhauling training and reporting of incidents a priority.

In addition to the live training program and independent counsel, Hochul also said that steps to address harassment and discrimination include mandatory in-person training for all Chamber staff as well as the creation of a new human resources department within the Executive Chamber.