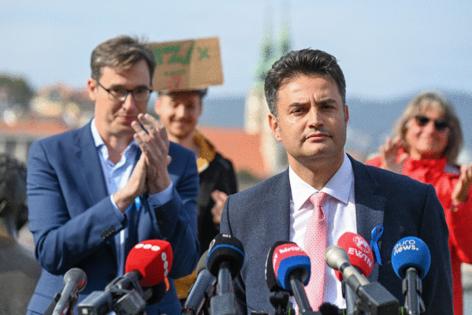 Marki-Zay has vowed to undo Orban’s stranglehold on politics, the economy and culture in the European Union member state, including by firing loyalists the premier has appointed to lead state institutions. He’s also pledged to disregard parts of the constitution he says serve to ensure Orban’s influence even in case of an election defeat.

At first glance, the 49-year old Marki-Zay, who voted for Orban’s Fidesz party back in 2010, is an unlikely choice for the mostly urban and liberal opposition. Since then the Hungarian leader has become a standard-bearer for European populists and a thorn in the side of the EU by championing his anti-immigrant, anti-liberal agenda as the defense of Christian and conservative values.

“We want to build a new Hungary and bring about a new culture where love reigns,” Marki-Zay said in his victory speech in downtown Budapest. “You can’s defeat darkness with darkness, only with light.”

In his pitch to voters, Marki-Zay said it was precisely his conservative credentials — he’s a devout Catholic and the father of seven children — paired with a drive to root out corruption and restore democratic checks and balances that made him electable even in rural areas, Orban’s key constituency.

The strategy worked, at least among opposition voters, who flocked to his banner after seeing left-wing candidates defeated in the past three general elections. Marki-Zay’s outsider image — he’s not a member of a political party — also helped him attract younger voters who’re looking for a fresh face.

While opinion polls show the opposition alliance and the ruling Fidesz party neck and neck in most polls ahead of elections likely to take place in April — Marki-Zay will face an uphill battle.

During 11-years of uninterrupted rule, Orban overhauled the constitution, redrew electoral districts and extended his influence over the media and courts. His success inspired copy-cat programs among populist leaders in Europe, including in Poland. The EU is holding back billions of euros of funding as it probes suspected rule-of-law violations.

Marki-Zay first sent shock-waves across the political establishment in 2018, when he won the mayoral race in the southeastern farming town of Hodmezovasarhely, a Fidesz stronghold for the previous 20 years.

The key, he told Bloomberg in an interview at the time, had been for the opposition to back a single candidate. When Orban’s rivals failed to repeat the strategy in general elections that year, the premier won by a landslide.

“The dam burst here and for that to happen it had to happen in a place like Hodmezovasarhely, where Fidesz seemed invincible,” Marki-Zay said.