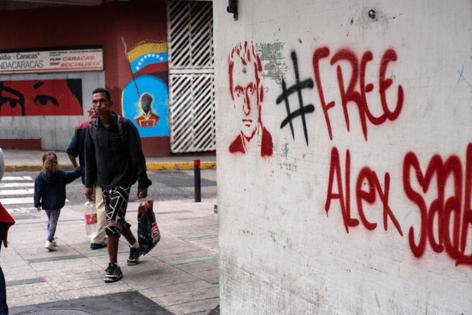 MIAMI — Alex Saab, the alleged partner and main fixer of Venezuelan ruler Nicolás Maduro, is scheduled to appear before a U.S. judge in Miami on Monday to face money laundering charges amid growing tensions with the Caracas socialist regime.

Saab, 49, was extradited from Cape Verde on Saturday after his legal team ran out of options to stop his extradition following a 16-month legal battle. The Maduro regime, which claims that the detained Colombian businessman is a Venezuelan diplomat, reacted upon hearing the news by ordering that six American oil executives under house arrest be taken back to prison and by halting its negotiations in Mexico with opposition leaders.

Saab was being held on Saturday at the Miami Federal Detention Center, near the federal courthouse, and will have his first court appearance Monday afternoon, but his arraignment will likely be at a later date.

His lawyers had previously appealed the U.S. extradition request at the 11th Circuit Court of Appeals in Atlanta, arguing that Saab had diplomatic immunity given that he was an official Venezuelan envoy, after a federal district judge had rejected his motion while under detention in Cape Verde, where he also fought the request.

Saab’s lawyers have had a hard time convincing the U.S. and the Cape Verde courts that he is immune from prosecution, concluding that Saab is not really a diplomat. His appeal in the U.S. was also seen as premature given that at the time he was still being held abroad.

Saab’s extradition is only the latest development in a series of cases brought in the U.S. against high-ranking government officials and their business partners charged with money laundering and massive corruption practices that have siphoned out billions of dollars from Venezuela.

But none of the other cases have triggered such a virulent response from the Caracas regime, which paid for a high-profile team to attempt to secure his liberation in Cape Verde and has attempted to make his release a precondition to reaching a deal with the United States and the opposition to end the country’s political stalemate.

The intense tug-of-war between the U.S. government and Venezuela over Saab is often portrayed as the product of Maduro’s lingering fear that his eventual extradition could lead to a plea deal that could reveal highly sensitive financial information about his regime, which is accused by Washington of running a drug cartel.

The Colombian businessman was arrested in June last year, after his private jet stopped at the island off the African coast on its way to Iran. The Miami U.S. Attorney’s Office charged Saab and his partner, Álvaro Pulido, with running a corruption and money-laundering network that allowed them to extract $350 million from Venezuelan state coffers and transfer them abroad. If found guilty, they face up to 20 years in prison.

Saab’s extradition did not bode well for six American executives charged with corruption by the Maduro regime. They were picked up by security forces a few hours after news of Saab’s extradition broke in social media.