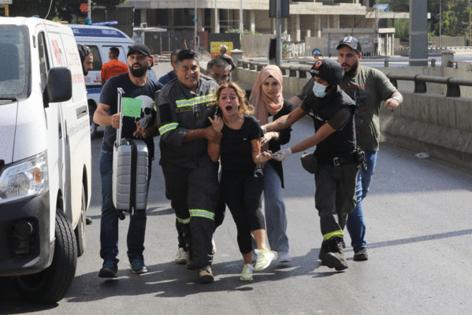 Armed clashes between Hezbollah militants and their opponents killed six people and wounded at least 30 others at a protest against the judge investigating last year’s deadly explosion at Beirut’s port.

Hezbollah demonstrators and their allies were attacked Thursday as they headed to the Justice Palace, the Lebanese army said in a statement. Men strapped with heavy guns and equipped with rocket-propelled grenade launchers opened fire from the streets toward buildings nearby, television footage showed. It wasn’t clear who or what triggered the gunfire.

“The clash first took place by sniper fire and the first casualty was a shot to the head,” Interior Minister Bassam Al-Mawlawi told reporters after meeting with security forces. Hezbollah and allies, in a statement, said forces belonging to a rival Christian group started the violence.

Ambulances were seen rushing to the area as residents fled their homes with the help of civil defense personnel.

It was the first armed clash in the capital in years, and it highlighted the fragility of Lebanon’s security and political systems. While Hezbollah is the best equipped militia in the country under the guise of battling Israel, its opponents are also armed. The group’s demand that the government discuss the judge’s conduct has forced a suspension of cabinet sessions.

Dozens of Hezbollah supporters and their allies had turned out on Thursday seeking the removal of the judge, Tareq Bitar, contending he is biased and politicized.

Four former cabinet ministers implicated in the blast have also asked for Bitar’s removal, accusing him of targeting them personally. They are charged with negligence and probable intent over the blast that killed at least 220 people and wounded thousands as it ripped through swaths of central Beirut.

They were allegedly notified of the arrival of a vast cargo of ammonium nitrate at the port in 2014 but failed to take steps to reduce the safety risk.

Families of the victims of the Beirut blast have lobbied in favor of Bitar, fearing politicians are trying to influence the investigation to avoid justice. Bitar was named in February to lead the probe after his predecessor was removed following similar accusations from the politicians implicated.