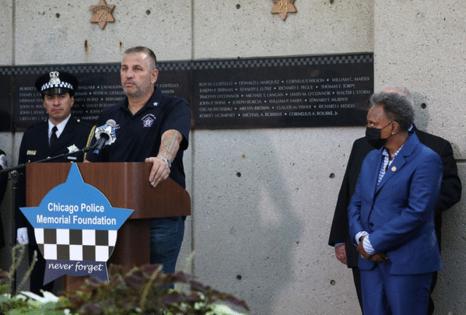 CHICAGO — The head of Chicago’s police union has advised officers not to comply with the city’s COVID-19 vaccine reporting requirement and says members should be willing to be sent home without pay rather than submit to the shot mandate for city workers.

With city employees’ vaccine status deadline Friday, Fraternal Order of Police Local 7 President John Catanzara also said in a video posted Tuesday that the union has filed a labor grievance against the city and plans to pursue legal action to fight the mandate.

“I’ve seen some of the messaging from the FOP president, but really what we’re focused on is making sure that we maximize the opportunity to create a very safe workplace,” Lightfoot said.

Catanzara’s video was posted to Facebook and YouTube the same day that the FOP announced the death of former police union President Dean Angelo. He reportedly had been hospitalized with COVID-19 complications.

Lightfoot announced last Friday that, through the end of the year, Chicago city workers will have the option to be tested semiweekly for COVID-19 instead of getting vaccinated. But the city also said employees have to report their vaccination status by Friday. If they don’t, they’ll be placed on no-pay status.

Catanzara encouraged rank-and-file officers not to report their vaccine status to the city portal and instead to fill out forms citing “conscientious objection” to the vaccine mandate. He advised them to report to work Friday with the assumption they would be sent home. He said he would also forgo pay.

The mayor in her Wednesday comments didn’t address how the city would respond to mass noncompliance by FOP members.

The police union also released a letter it said went to the city attorney advising that if city did not reverse its vaccination reporting policy, “appropriate litigation will be initiated to preserve the collective bargaining rights of police officers and their unions.”

The FOP’s call for officers to not report vaccine status presses the city to “take a position formally” on conscientious objection, said Catanzara, so that FOP can take class-action.

Catanzara estimated that the city’s police force will operate at a capacity of 50% or less this weekend because of the actions.

“I can guarantee” that the city will not be able to sustain this small workforce, said Catanzara, predicting that the no-pay status would therefore last no longer than seven days.

ATLANTA — When the second-ranking Republican in the Georgia House saw a proposal to ban “obscene” books from libraries, she dialed up state education officials to raise her objections. Two years later, Jan Jones is ...Read More

WASHINGTON — Former White House Chief of Staff Mark Meadows will be the third Trump ally to be subject to a contempt of Congress charge from the Jan. 6 select panel if he refuses to show for a deposition Wednesday.

FORT LAUDERDALE, Fla. — Florida’s surgeon general, the controversial doctor who has cast doubt on the safety and effectiveness of vaccines, is the star of a new public service announcement that touts “innovative ...Read More

SACRAMENTO, Calif. — Gov. Gavin Newsom, who wrote a book about his own struggle with dyslexia, intends to steer more money through the state budget toward screenings for the condition, as well as additional funding for ...Read More