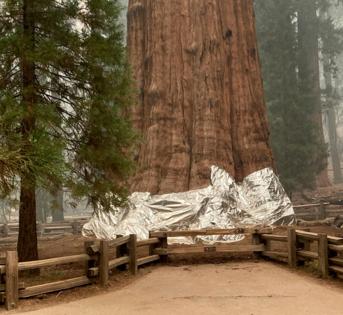 Crews were hoping a shift in the weather would help them get the upper hand against several wildfires burning in Northern California and the southern Sierra. But forecasters warned Saturday the window of opportunity could be short-lived, as a cooling trend was expected to be followed by warmer temperatures and dry winds.

The Fawn fire north of Redding had burned 7,544 acres and was 10% contained as of Saturday morning. At least 100 structures were believed to have been destroyed based on a survey by fire crews, but damage assessment teams were out Saturday conducting a more detailed review, said Scott Ross, public information officer with the California Department of Forestry and Fire Protection.

Alexandra Souverneva, 30, of Palo Alto, was charged with arson for allegedly sparking the fire. Authorities did not disclose a potential motive but said she may be linked to other fires in the county and state.

The fire was burning in steep terrain through heavy brush, oak and pine, Ross said. Some evacuations were lifted Saturday as its growth slowed.

Conditions had already started to cool off, helping to boost relative humidity levels. The trend was expected to continue, with temperatures at least 10 degrees below average by Tuesday, said Sierra Littlefield, a meteorologist with the National Weather Service in Sacramento.

A storm system moving into the Pacific Northwest on Monday night into Tuesday could also bring a small amount of precipitation to the area, potentially less than a 10th of an inch, Littlefield said.

“Most of the brunt will be well to our north,” she said. “We’ll be getting the tail end in Northern California.”

But as the system moves out mid to late week, it’s possible that drier, breezier conditions will develop behind it, Littlefield said.

“We’ll also see temperatures trending up toward next weekend as high pressure builds in behind that passage of the low-pressure system,” she said.