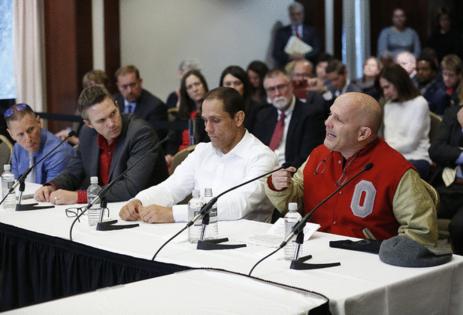 A federal court judge has dismissed all outstanding lawsuits against Ohio State University over its handling of sexual abuse allegations against former university doctor Richard Strauss.

Judge Michael H. Watson issued an opinion late Wednesday in U.S. District Court in Columbus granting Ohio State's motion to close the case, saying plaintiffs could not move forward because of expired statute of limitations related to sexual abuse claims, which for most criminal rape charges in Ohio is up to 20 years.

Watson wrote in his opinion that it is "beyond dispute" that the plaintiffs have "suffered unspeakable sexual abuse by Strauss," and that doctors, athletic directors, coaches and others in positions of power "failed to protect these victims from Strauss' predation.

"Plaintiffs beseech this Court to hold Ohio State accountable, but today, the legal system also fails Plaintiffs," he continued. "Plaintiffs' pain and suffering is neither questioned nor overlooked by this Court; indeed, their claims cry out for a remedy."

Watson said it is not within the judiciary's power to help the plaintiffs but it instead "starts with the legislature."

"At all times since the filing of these cases, the Ohio legislature had the power, but not the will, to change the statute of limitations for these Plaintiffs," he continued.

One hundred and twenty-six plaintiffs in two of the dismissed cases — represented by Scott Elliot Smith, LPA; Emery Celli Brinckerhoff Abady Ward & Maazel LLP; and non-profit litigation and advocacy group Public Justice — said they plan to appeal Watson's decision to the U.S. Court of Appeals for the Sixth Circuit.

“Today’s ruling is not only deeply disappointing,” the legal team said in reaction to Watson's ruling, “but also sends a disturbing message that the very real challenges sexual abuse survivors often face in understanding what has happened to them — and who enabled the abuse they experienced — is irrelevant when they ultimately ask for the court’s help in holding abusive people and institutions accountable.

"OSU spent decades denying, hiding, and evading the truth about its role in concealing the abuse that happened on its watch. Today’s ruling punishes survivors already traumatized by the university’s callous campaign of deception. The court’s decision cannot, and must not, be the final word in the survivors’ journey towards justice.”