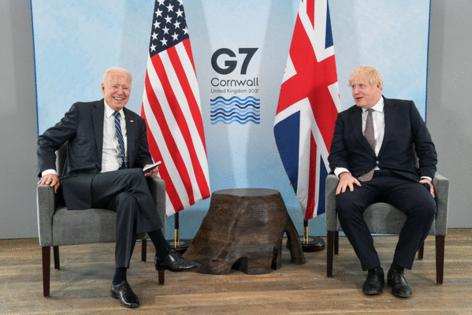 Prime Minister Boris Johnson arrives in the U.S. on Sunday knowing time is running out if he’s to prevent a critical round of global climate talks he hosts next month from ending in failure.

In meetings with world leaders including U.S. President Joe Biden over the next three days in New York and Washington, Johnson will seek support — and more cash — to fund efforts to tackle climate change. He’s also due to hold talks with Amazon.com Inc. co-founder Jeff Bezos during his U.S. trip, the prime minister’s first outside Europe since the start of the pandemic.

Johnson is trying to put Britain at the forefront of global efforts to fight global warming, part of a strategy to bolster the country’s standing after leaving the European Union. A significant amount of political capital is therefore riding on the outcome of this year’s major round of United Nations climate talks, known as COP26, starting late October in Glasgow, Scotland.

Specifically, the U.K. wants the meeting to finally deliver on a pledge, first secured at the 2009 UN climate summit in Copenhagen and renewed in 2015 in Paris, for poorer nations to receive $100 billion per year from 2020 from richer countries to help them cut carbon emissions and deal with climate change.

“Richer nations have reaped the benefits of untrammeled pollution for generations, often at the expense of developing countries,” Johnson said in a statement released ahead of his trip.

“As those countries now try to grow their economies in a clean, green and sustainable way we have a duty to support them in doing so — with our technology, with our expertise and with the money we have promised,” he said.

The U.K. warned last week that recent progress has been insufficient. Developing nations received $79.6 billion in 2019, the Organization for Economic Co-operation and Development said Friday in its latest report.

But the backdrop to Johnson’s U.S. visit, as well as next month’s climate summit, makes for some tricky diplomacy.

A three-way defense pact between the U.S., U.K. and Australia has angered both France and China, which sees the agreement to supply Australia with nuclear submarines as a bid to challenge its interests in the Indo-Pacific region.

Johnson’s hand-picked COP26 President Alok Sharma told broadcasters that while China’s role in climate talks is critical as the world’s biggest emitter, he couldn’t yet say if President Xi Jinping will attend the summit.

“Normally these things come a bit closer to summits,” he told the BBC. “I am very, very hopeful that we will have a delegation from China that is coming.”

Though the defense pact is likely to have lifted the mood, Johnson’s relationship with Biden has also been strained on issues including Brexit and the chaotic withdrawal from Afghanistan. Their meeting Tuesday in Washington will attract intense scrutiny.

Johnson also faces domestic pressure over his government’s green policies, as ministers prepare for a third day of crisis talks with energy companies over a surge in gas and electricity prices caused, in part at least, by calm weather reducing output from the nation’s wind farms.

At the end of the UN General Assembly this week, the U.K. will publish a list of countries’ climate finance commitments so far, and Johnson will he hoping that helps build momentum. The U.K. has committed 11.6 billion pounds ($16 billion) over the next five years.

On Monday, Johnson will announce a further 550 million pounds to support developing countries accelerate the phasing out of coal — another goal of the COP26 meeting. He will co-host a breakout meeting on climate change with UN Secretary General Antonio Guterres.

While in the U.S., Johnson will also meet Amazon.com’s Bezos to discuss climate change, as well as international efforts to reach a consensus on taxing tech companies.

“We have been an advocate for an international solution to the tax challenges posed by digitalization of the economy,” Johnson’s spokesman, Max Blain, told reporters ahead of the U.S. trip. “We will very much be looking to raise that.”