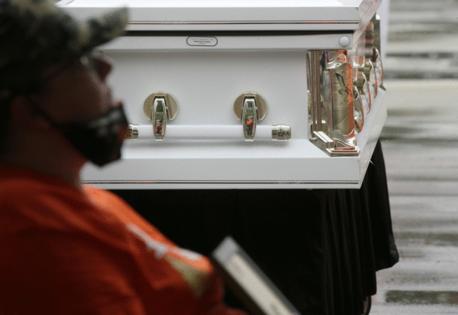 COLUMBUS, Ohio — Identifiable by their bright orange shirts, the group of mothers who lost children to gun violence huddled under the tent outside Columbus City Hall Sunday afternoon as rain pelted the ground.

Malissa Thomas-St. Clair, one of the organizers behind a rally and march to advocate for an end to gun violence, stood before the women and passionately prayed that the rain would not dampen their message.

"We are going forward even in the rain," said Thomas-St. Clair, the founder of Mothers of Murdered Columbus Children, a group composed primarily of women whose children have become victims of gun violence.

As if on cue, the rain began to slow shortly after 2 p.m. and then stop altogether in time for a slate of speakers that included Columbus City Council President Shannon Hardin and new Columbus Police Chief Elaine Bryant.

"I, too, am a mother first, and I'm inspired and in awe of all the mothers here," Bryant said. "We have to do better as a community, as a (police) department, as a city."

Community leaders addressed a crowd of more than 200 ahead of a planned march around Downtown Columbus as part of the rally organized by Mothers of Murdered Columbus Children in collaboration with a cease-fire initiative organized by Near East Side barbershop owner Al Edmondson.

Thomas-St. Clair, whose own son Anthony was murdered in 2013, founded the organization nearly a year ago with the goal of building a coalition among other grassroots organizations that are committed to violence prevention and intervention efforts.

"We as mothers are tired of having to see other mothers endure this excruciating pain," Thomas-St. Clair told the Dispatch before the event. "It's imperative that going into the back-to-school season that we are in solidarity for the safety of our children."

The organization, which counts more than 1,800 people among its ranks based on membership to a private Facebook group, has been increasingly vocal this year at homicides continue at a record-setting pace for Columbus.

A man who died Saturday afternoon following a shooting early that morning at the Spotlight Lounge in the Hilltop — which left four others injured — is the latest homicide victim in a grisly year that could set a record for homicides in Columbus.