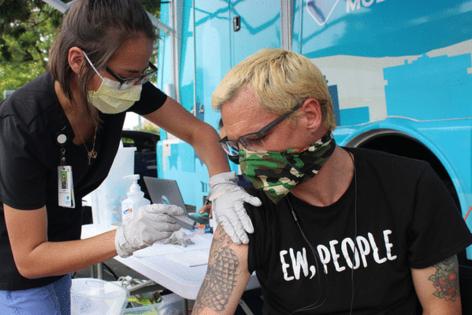 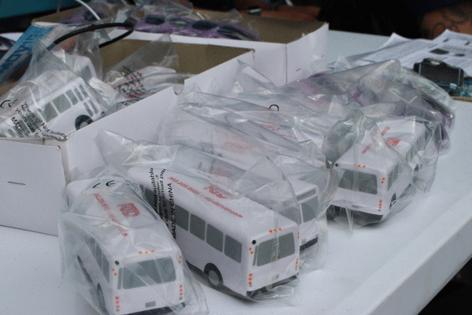 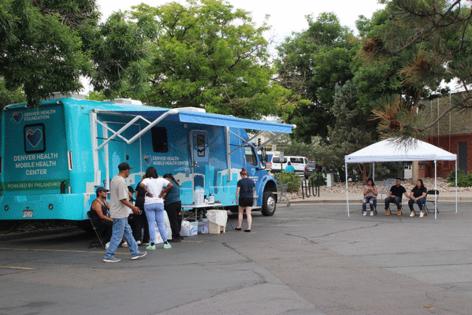 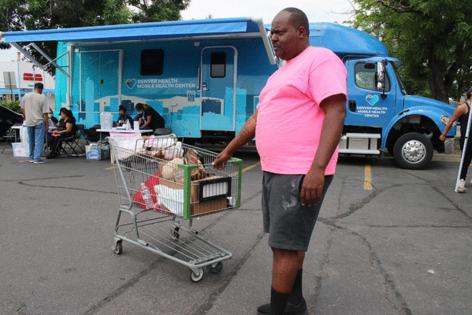 AURORA, Colo. — John Letson had seen too many apocalyptic movies to feel comfortable getting a COVID-19 vaccine initially.

“I was completely against it,” the 40-year-old movie buff said, referencing “I Am Legend” and “Children of Men,” in which humanity is in jeopardy, as examples of what could go wrong. “I think an untested thing during a pandemic has later effects that we don’t know yet.”

After discussing with a doctor the various myths that have arisen about the vaccines, his opposition softened. On the way to get pizza in late June, he happened upon a mobile vaccination clinic behind a bus stop on Colfax Avenue in this Denver suburb and got his first dose.

“I was here. They were here,” he explained, as a nurse gave him a shot of the Pfizer-BioNTech vaccine.

The mobile clinic in the East Colfax neighborhood is part of a new push by Denver-area public health officials to find the neighborhoods where vaccinations lag behind state or county averages. Using detailed maps that show vaccines given by ZIP code or census tract, the health departments highlight underperforming areas being masked by a county’s overall vaccination rate. They then partner with community organizations with intimate knowledge of those neighborhoods to determine strategies to address the specific barriers keeping residents from being inoculated.

As the Biden administration seeks to boost the nation’s vaccine rate by going “neighborhood by neighborhood,” in the president’s words, the approach taken on Colfax Avenue could become a model for the rest of the country. According to the National Association of County and City Health Officials, such efforts depend on the accuracy of the data and the willingness of jurisdictions to work together, which can be difficult for some regions to accomplish. The Denver-area effort has managed to use granular data across seven counties to help raise the vaccination rate by an estimated 4 percentage points in one troubled Colfax area in about a month.

“We have to do the dirty work to be with the community and listen to what their actual concerns are,” Nicole Steffens, a program manager with the nonprofit Colorado Health Institute, said in a presentation on the mapping tool. “We can take all the data that we want based on large, mass groups of people on surveys with vaccine hesitancy or why people aren’t getting vaccinations, but that might not actually apply to that very specific location.”

The public health agencies cooperating in the Denver region represent 3 million Coloradans, about 60% of the state’s population. They overlay data from the state vaccine database with the COVID-19 caseload, poverty rates and racial demographics to highlight areas of concern.

“We weren’t very surprised to see the areas that lit up,” said Meghan Prentiss, with the Tri-County Health Department, which serves Adams, Arapahoe and Douglas counties east and south of Denver. “They all kind of followed those common trends of other health indicators.”

East Colfax topped the department’s priority list. The neighborhood, which spans the border between Denver and Aurora, is one of the more impoverished in the metro area, with large numbers of immigrants and minorities, many of whom speak neither English nor Spanish.