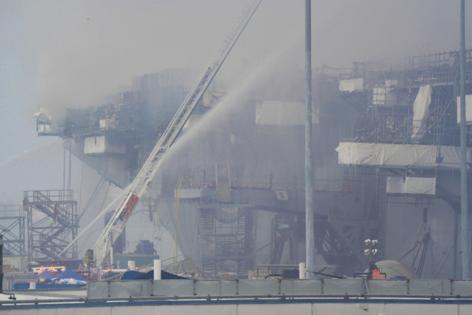 “On July 29, charges under the Uniform Code of Military Justice were brought forth against a Navy Sailor in response to evidence found during the criminal investigation into the fire started on USS Bonhomme Richard (LHD 6) on July 12, 2020,” said Cmdr. Sean Robertson, a spokesperson for the San Diego-based 3rd Fleet.

“The Sailor was a member of Bonhomme Richard’s crew at the time and is accused of starting the fire,” Robertson said.

The sailor is not currently confined to the brig, Robertson told The San Diego Union-Tribune Thursday.

A month after the fire, news broke that the service suspected arson. That same month, Navy investigators searched the home and property of a sailor based on the ship.

Earlier this month, the Union-Tribune first reported that the sailor was detained at the Marine Corps Air Station Miramar brig for a short time last year. However, the sailor’s lawyer said he was released in November and he hadn’t heard from the Navy since.

The Navy did not name the sailor facing charges. The attorney for the sailor held in the brig, San Diego-based military lawyer Gary Barthel, could not be immediately reached for comment Thursday. It is unknown whether the sailor charged is the same one previously held in the brig.

Under the military justice system, a sailor accused of crimes equivalent to felonies faces general courts-martial. Before that, they will face what’s called an “Article 32" hearing, which is essentially an arraignment. A hearing officer will hear testimony and review evidence before making a recommendation on formally pressing charges.

A date for the hearing has not been set, Robertson said.

Months after the fire was extinguished, the Navy announced it would send the ship to the scrap heap, saying that to repair and retrofit the 22-year-old vessel was too expensive.

The fire was one of the largest peacetime losses ever by the Navy.

The 844-foot Bonhomme Richard was near the end of a two-year, $250 million upgrade to accommodate the F-35B fighter at the time of the fire.

The blaze began around 8:30 a.m. on July 12. The fire is believed to have begun in the ship’s lower vehicle-storage area, which is directly below a large well deck. Once the fire reached the cavernous, oxygen-rich well deck, it spread rapidly, eventually consuming every interior space on board above the waterline.