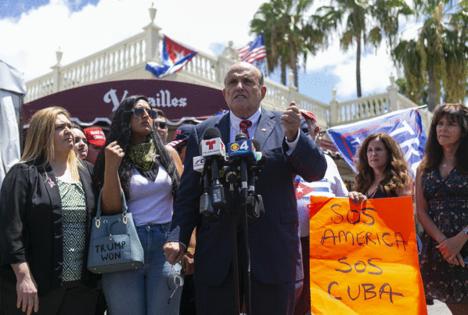 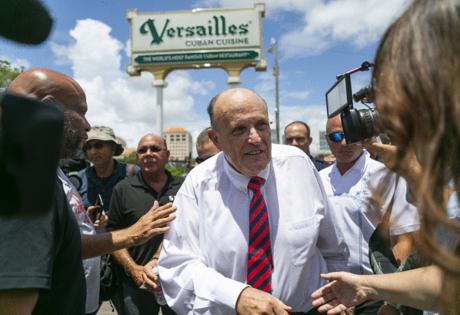 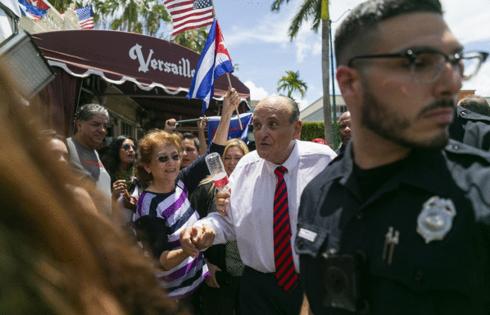 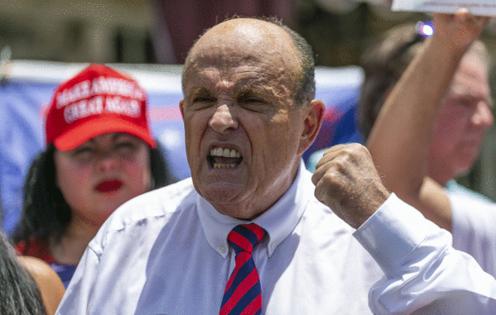 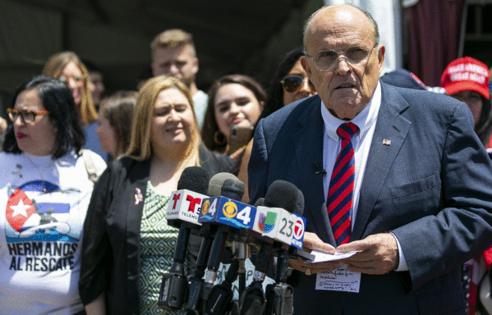 MIAMI — As thousands of Cuban Americans marched in Washington Monday to call for the U.S. to put more pressure on Cuba’s government, former Trump lawyer Rudy Giuliani denounced Cuba’s communist regime while speaking to a small group of people outside of Versailles Restaurant in Little Havana.

The protests in Washington and Giuliani’s rally turned news conference were held purposefully on July 26, which marks 68 years since Fidel Castro led his first attack against Batista’s government in Cuba and began his revolution. July 26 is a national holiday in Cuba.

In Miami, about 10 people carrying Cuban flags and wearing shirts and caps with slogans such as “Patria y Vida” and “Cuba SOS,” were outside of the iconic Cuban restaurant Monday morning as horn-honking cars drove by in support. About a dozen police patrols lined the street and set up an impromptu watch tower in the Versailles parking lot.

Giuliani, also the former mayor of New York City, entered the restaurant at about 9 a.m. and did not come out until about 12:30 p.m. to give his remarks in a short, improvised press conference under a scorching sun. He spoke to a group of about 15 people surrounding him, including five protesters who were there since the morning and stood near him. Some of the people waiting to be seated in the restaurant for lunch also walked closer and listened in.

Standing at a makeshift microphone stand by the restaurant’s main entrance, Giuliani in his brief remarks described the Cuban government as one of the most “inhumane, indecent, horrible regimes” in history. He denounced the imprisonment of artist Anyelo Troya, who filmed part of the “Patria y Vida” musical video.

He also criticized President Joe Biden for his reaction to the island’s protests that erupted July 11, which Giulani believes “will be a very important day in the history of liberty and freedom.”

He said: “it took our president four days to respond to this.” Then added: “And then he made a statement that’s pathetic.”

Biden issued a release July 12 that said in part, “We stand with the Cuban people and their clarion call for freedom and relief from the tragic grip of the pandemic and from the decades of repression and economic suffering to which they have been subjected by Cuba’s authoritarian regime.”

Giulani said he hasn’t seen any signs that read “give me a vaccine” — only different versions of “Cuba libertad” — and he doesn’t believe the protests have anything to do with COVID-19.

“If the president of the United States can’t speak up for freedom clearly, succinctly and with great strength, then he isn’t a real president,” Giulani said.