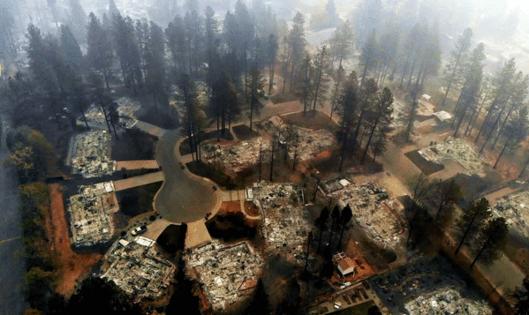 But the faint light soon gave way to darkness as smoke from the burgeoning Camp fire rolled in.

"The whole sky turned completely black, and there were embers flying around," Babnik recalled. "I remember it smelling horrible."

She hastily evacuated to nearby Chico with little more than an overnight bag. Her rented home, along with nearly every other structure in Paradise, would soon be reduced to ash.

Although several years have passed and thousands of additional wildfires have ignited across California, researchers are still unpacking the precise dangers of smoke from blazes like the Camp fire. Already this year, plumes from Western fires are making their way across much of the U.S. and Canada.

One recent study found that smoke from the Camp fire was particularly noxious because it contained particulates from burned homes as well as vegetation — something officials fear will become more common as home-building pushes farther into the state's wildlands.

Another study linked wildfire smoke to an increased risk of contracting COVID-19.

The findings indicate that as fire season ramps up, the dangers of respiratory illness and other serious side effects from smoke loom nearly as large as the flames.

The 2018 Camp fire was the deadliest wildfire on record in California. At least 85 people died, and nearly 19,000 buildings were destroyed, mostly in Paradise.

The fire also generated a massive plume of heavy smoke that spewed dangerously high levels of pollution into the air for about two weeks, according to a study released this month by the California Air Resources Board.