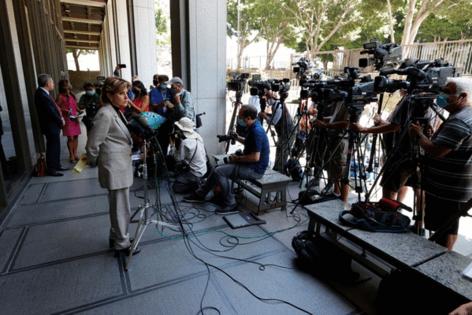 LOS ANGELES — Harvey Weinstein made his first appearance in a Los Angeles courtroom Wednesday, pleading not guilty to multiple counts of sexual assault and kicking off a legal process that will see him stand trial for alleged attacks on women that, in some cases, happened nearly two decades ago.

Weinstein, 69, was indicted in April on multiple counts of forcible rape, forcible oral copulation and sexual battery. He faces 11 charges in connection with alleged assaults that took place between 2004 and 2013 in Beverly Hills and West L.A.

The disgraced Hollywood mogul, who is already serving a 23-year prison sentence in New York after he was convicted of sexual assault in a Manhattan trial last year, was extradited to California on Tuesday over the objections of his defense attorneys, who say he desperately needs surgery to avoid losing his eyesight. Weinstein has denied all wrongdoing and appealed his conviction in New York.

On Wednesday, Weinstein appeared in a downtown L.A. criminal courthouse wearing a brown jail jumper and seated in a wheelchair. He did not speak during the arraignment except to say thank you after the judge wished him good luck.

Former L.A. District Attorney Jackie Lacey first brought charges against Weinstein in January 2020, on the eve of jury selection in the Manhattan case. While several alleged victims came forward to the Los Angeles Police Department in 2017, shortly after reports of Weinstein’s alleged predatory behavior first surfaced, prosecutors said they needed years to win over the women’s trust and verify their stories.

Only one woman’s identity has been made public. Lauren Young, an aspiring actress who was 23 at the time of the alleged assault, has accused Weinstein of trapping her in a room at the Montage Hotel in Beverly Hills and groping her while he masturbated. Young testified as a “prior bad acts” witness during the mogul’s New York trial.

A second alleged victim in the L.A. case, an Italian model who spoke to the Los Angeles Times on the condition of anonymity in 2017, has said Weinstein attacked her inside Mr. C’s hotel in Beverly Hills in 2013. The woman alleged Weinstein barged into her hotel room and violently raped her.

Unlike his New York hearings, Weinstein’s first L.A. appearance was a more muted affair. Roughly two dozen reporters and attorneys lined the 13th floor of the downtown criminal courthouse waiting for the mogul’s arrival Wednesday morning. Among them was Gloria Allred, who has represented several of Weinstein’s accusers.

In court papers filed Wednesday, Weinstein’s lead defense counsel, Mark Werksman, again asked a judge to send the Miramax co-founder back to New York so he could receive medical treatment. But those arguments had already failed across multiple hearings in upstate New York prior to Weinstein’s extradition. Werksman also filed a motion seeking the dismissal of all charges on Wednesday.