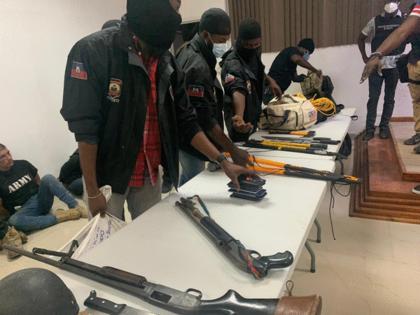 MIAMI — The rule of thumb in any good investigation is to follow the money. For Haitian police investigating the July 7 assassination of their president, the money trail partially runs through a little-known Ecuadorian emigre and private lender who lives in Broward County.

In the two weeks since the shocking murder of President Jovenel Moise , police in Haiti have repeatedly during news conferences flashed the image of Walter Veintemilla and the name of his company, Worldwide Capital Lending Group. The money for the assassination plot, they’ve alleged, ran through Veintemilla, a Weston resident, and his Miramar-based firm.

The company’s name sounds like it has global reach. But it basically operates as a private party lender, the kind of company that deals with people who can’t easily get a bank loan or who don’t want the scrutiny that comes with one. Veintemilla is a loan broker; he gets private investors to lend their money on the promise of a high rate of return and he takes a cut or commission.

His lawyer, Robert Nicholson, this week fielded a range of questions from a reporting team at the Miami Herald, el Nuevo Herald and the McClatchy Washington Bureau, saying that Veintemilla brokered a loan to fund what he believed to be a plan to replace Haiti’s president, Moise, with an interim leader in a peaceful transition of power.

“My client had nothing to do with the assassination,” said Nicholson, a Fort Lauderdale private attorney and former assistant U.S. attorney. “At no point was there any discussion or suggestion of a plan involving a violent overthrow of the Haitian government or the assassination of the president.”

All of Veintemilla’s company documents pertaining to loans given to people named in the Haitian investigation have been turned over to U.S. federal agencies, said Nicholson, noting that his client had not been interviewed by U.S. law enforcement as of Tuesday.

Veintemilla, he said, did no more than broker two loans to two South Floridians caught up in the monumental events on the island. They are: Christian Emmanuel Sanon, a Haitian American doctor from Boynton Beach, who has been arrested and is in custody in Haiti, and Doral-based CTU Security and its president, Antonio “Tony” Intriago, a Venezuelan emigre who is on the radar of Haitian and U.S. investigators but is not in custody.

Veintemilla, 53, left Quito, the capital of Ecuador, and settled in the Miami area with his family when he was a boy. His career has been in South Florida’s private lending field, mostly in the rough-and-tumble world of mortgage lending. Courts show Veintemilla was involved in at least 10 lawsuits since 2006, eight as a defendant and the other two as a plaintiff trying to evict a tenant.

Beyond private lending, Veintemilla also runs an insurance brokerage business, and had forays into foreign exchange and other businesses, according to records on file with the Florida Division of Corporations.

There is nothing in the public record to suggest that Veintemilla had the financial wherewithal to fund a large military-style operation to topple and kill a sitting president. More than 20 people have been arrested in Haiti, the majority of them Colombian commandos who said they were hired by CTU and were living in Haiti from about May until the assassination of the president. The cost of transporting them, feeding and housing them, along with providing training, would likely have run into the millions of dollars.