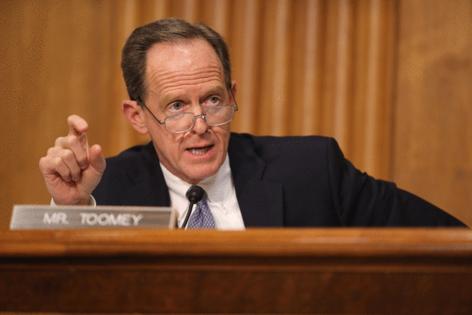 WASHINGTON — The fate of the Senate’s surface transportation reauthorization bill might lie in part in the hands of a retiring Republican senator who has emerged as one of Congress’ most outspoken critics of transit.

Those watching the bill say they have a good idea why: Sen. Patrick J. Toomey, the ranking Republican on the committee, has been increasingly critical of the heavy federal investment in transit, arguing that the federal government has dumped dollars on systems but not demanded any reforms.

Toomey, R-Pa., is particularly incensed that Congress has spent some $70 billion on transit as part of a series of COVID-19 relief bills targeted in part on transportation industries pummeled by the pandemic. That money is on top of the more than $12 billion that Congress ordinarily invests in transit during a typical year.

“We have spent a staggering amount of money,” he said, adding that Congress spent more last year “than the sum total of the entire operating budget and capital budget of every transit agency in America combined.”

As part of his $2 trillion-plus infrastructure proposal, President Joe Biden has suggested spending an additional $85 billion in transit over the course of eight years. Toomey, 59, was part of a group of Republicans led by Sen. Shelley Moore Capito that tried unsuccessfully to broker a deal with Biden, and he made clear during an April 15 hearing that he thought the amount suggested by Biden was excessive.

“If we were to pass this bill that President Biden has requested and we do the ordinary funding extension that’s being contemplated here at this hearing and we combined that with the $82 billion we provided over the last year, why, all of that money is enough that, according to 2019 Census data, we could buy every transit commuter in America a $30,000 car,” he said.

“I was taken aback by the hostility,” said Beth Osborne, director of Transportation for America, who testified during that hearing. “I’ve never seen that out of him.”

She said while Toomey has called for accountability and expressed some skepticism for the federal investment in transit in the past, “this is a totally different thing from someone from a state like Pennsylvania that has one of the bigger transit systems in the country.” Her group’s mission includes advocating for transit.

“For him to not understand that role that it plays in a region’s economy was really startling,” she said.