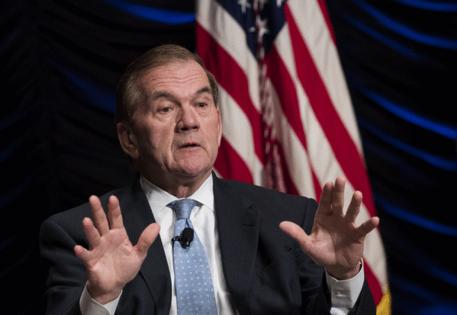 “The Ridge family wishes to share the following news about Tom,” the family announced on his Twitter feed Wednesday.

“Tom Ridge, the 43rd governor of Pennsylvania and first U.S. secretary of homeland security, was transferred by ambulance to a hospital in the Washington DC area this morning after having suffered a stroke at his residence in Bethesda, MD,” the family wrote, adding that the 75-year-old Ridge “was conscious when he arrived at the emergency department and later underwent a successful procedure to remove a blood clot. He remains in critical but stable condition.”

They went on to request “prayers for a full recovery” and promised updates.

Ridge, a Republican, served as the first Homeland Security secretary from 2003 to 2005 and is credited with creating the color-coded terrorism risk advisory system still in use today.

In 2016 he said he would not vote for Donald Trump or Hillary Clinton, but in 2020 he said he would vote for Joe Biden, his first-ever vote for a Democratic presidential candidate, on the grounds that it was imperative to reject Trumpism, citing the then-president’s “reprehensible behavior” and the need to “put country over party.”

At first, the group focused on what could be done about the pandemic. But as summer began and the deaths of ...Read More

If you’re going to Disney World, you will have to mask up.

Starting Friday, Disney guests will have to wear masks while indoors and on resort transportation, regardless of vaccination status. Face coverings are optional...Read More