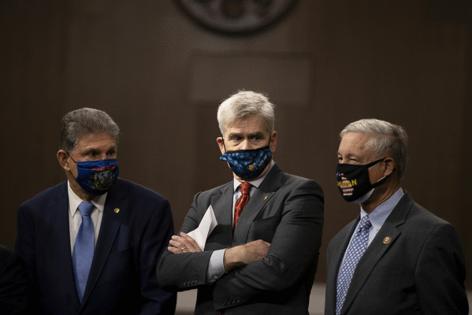 WASHINGTON — The White House has reached an impasse with Sen. Joe Manchin, the centrist Democrat from conservative West Virginia who this week reiterated his opposition to key elements of the president’s legislative agenda.

It’s left President Joe Biden with a decision to make.

In coming months, the leader of the Democratic Party must decide whether he can cajole Manchin with a mixture of schmoozing and arm-twisting that eventually convinces the lawmaker to relent — a process that threatens to further delay Biden’s agenda if it fails — or instead capitulate and move on to other issues, a decision that would anger the president’s liberal base and reduce the size and scope of his potential accomplishments.

Either approach carries risk, political veterans say, in dealing with a lawmaker whose opposition to any legislation can single-handedly stop it from becoming law in an evenly divided Senate.

“We’re all trapped in this choose-your-own-adventure book where Joe Manchin is the narrator, and he’s the only one who knows how this ends,” said Liam Donovan, a Republican lobbyist. “In the meantime, you either roll Manchin or you co-opt him by doing what he wants.”

So far, the White House is embracing a mixture of both approaches with a lawmaker whose recent policy pronouncements have taken Washington by storm.

In the past week alone, Manchin has declared his opposition to a Democratic-backed voting rights bill and once again insisted on the need for bipartisan compromise on a multibillion-dollar infrastructure package, arguing in both cases that the country would be better off if the parties were able to negotiate together in good faith.

He also reiterated that he will not vote to end the legislative filibuster, a step many Democrats on Capitol Hill consider necessary to pass the party’s full agenda in the face of united opposition from Republicans. Sixty senators are required to end the filibuster in the Senate, meaning Democrats would need the support of at least 10 Republican senators in a chamber split evenly between the two parties.

“American democracy is something special, it is bigger than one party, or the tweet-filled partisan attack politics of the moment,” Manchin wrote in a Charleston Gazette-Mail opinion piece published Sunday. “It is my sincere hope that all of us, especially those who are privileged to serve, remember our responsibility to do more to unite this country before it is too late.”

Manchin’s announcements created what some political observers say is the first real legislative stalemate for the president, who within months of taking office passed a nearly $2 trillion pandemic relief bill through Congress on a party-line vote and introduced two more expansive proposals to invest trillions of dollars in infrastructure and enhanced family care.